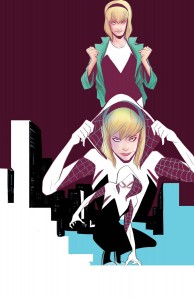 This week in Edge of Spider-Verse we meet Spider-Gwen! I loved the themes touched on in the “previously in Spider-Woman…” section. They are themes that ring true to the core of what makes Spider-Man, Spider-Man: power and responsibility. And it is quite interesting to see the same themes applied in a different way where Gwen Stacy was the one bitten by the radioactive spider on that fateful day instead of Peter Parker.

To me this was somewhat an emotional read. You really feel for Gwen. At least I do because I know what she means/meant to our Peter. This is the opposite side of the coin, what if Gwen became Spider-Woman and Peter was the one that died. What does that world look like; does Gwen have the strength and courage to keep fighting the good fight despite that loss?

This issue plays out slightly different from the first issue of Edge of Spider-Verse in the fact that the Superior Spider-Man does not show up at the end to rescue Spider-Woman from Morlun and to recruit him to his team of spiders. And I liked that a lot about this issue; I did not want each issue to be from the same cookie cutter.

The artwork for this issue was very solid, I have no complaints. I really enjoy Gwen’s costume design and the way her music is incorporated into the issue. The fight scenes are cool and it’s fun to see someone else as Spider-Woman, who in the 616 universe has been such a big part of Peter Parker’s life.

Rating: 6 (Out of 7) – Such a fun ride and great artwork. Looking forward to seeing more of Spider-Gwen in Amazing Spider-Man #9!