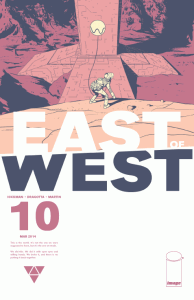 A determined man has the strength of a hundred armies. Nothing will stop him.

Death looks ‘nothing’ in the eye and drops him with a bullet.

East of West #10 picks up where the last issue left off. Death’s meeting with the Oracle doesn’t go as planned but it sets him on a path to the Sea of Bones. And that’s just the beginning of an issue that is packed to the brim with personality, character and plot twists.

Jonathan Hickman delivers one of the best issues to date with this one. He keeps the concept low and lets the characters lead the way as we get glimpses of the happenings from Death’s crew, three Horseman and the Great Beast which then culminates in a battle with Cheveyo in the Sea of Bones — an arid wasteland known as “Dead Country.” And even though the density of the plot has been lowered to normal levels, the story still provides a few twists as the characters start to question their own motives. This creates a nice balance of intrigue and mystery as to what we currently know about these characters and what may happen further down the line.

Hickman’s dialogue shines as each character personality comes to light whenever they speak. Death slings one-liners so perfectly you can’t help but smile as you read them. And the pieces that seemed one dimensional — Great Beast, Crow, Wolf — all show depth and insight here making their parts more integral to the whole. This book highlights that these characters are more than anger and vengeance. It’s great stuff.

Nick Dragotta is money here as well. He creates a wide variation of panel layouts and art direction keeping each page visually interesting. He does an excellent job of creating scope as well, making some pages and panels feel crowded and heavy while others have a vast landscape giving the reader a great feel for the atmosphere. He’s also a master of deadly stares, creepy eyes, and intricate design. Everything in this book looks dynamic and unique and then he hits you with his action sequences which hit the panel with speed and weight.

Frank Martin does an excellent job on colors providing lots of earth tones and a nice blend of complimentary colors to the main cast of white colored characters (Death, Wolf and Crow). They stand out like ghosts against dusty backgrounds and bold, fiery reds. And even though the book has tons of color, everything has a hazed, muted feel to it helping to create an “apocalyptic” atmosphere.

An abundance of personality and subtle plot twists make East of West #10 a must read. Fans of the series will enjoy the break from the “big picture” and new readers will get sucked in by the dynamic personality on display here.