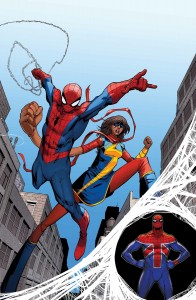 Two stories for the price of one! First Spider-Man teams up with Kamala Khan, the new Ms. Marvel! And in the second story, Edge of Spider-Verse finally makes its way to Amazing Spider-Man with the debut of Spider-UK!

Part one: Spider-Ms.Marvel Team up! I really like Kamala, and I definitely enjoyed her Wolverine team-up in her solo book and it was fun to see her with Spider-Man here. Both pairs have good chemistry and play off each other very well. I think she is fitting in nicely into the Marvel Universe. Can’t wait until she meets Carol!

I like how this issue tied in what is happening lately in Amazing Spider-Man and what has happened so far in Ms. Marvel. It seems like a team up that makes sense story wise. And it is always great to see Kamala fangirl over the superheroes she teams up with. First Wolverine and now Spider-Man, who better to teach her the ropes of superheroing. One thing that stuck out to me from this story is who’s the man in the hood that says he has history with Spidey?

Loved the opening scene between peter and Cindy, they have such an interesting dynamic because they are connected in a way no other girl has been connected to Peter and it’s very primal. And Anna Maria’s reaction to them is priceless. When Anna Maria confronts Peter about spending less time as Spider-Man, she does make some good points, but overall I agree with Peter, Otto was a jerk and there is no small stuff. But Otto got results, despite how aggressive and ruthless his tactics were for someone in a Spider-Man mask.

Part Two: Meet Billy Braddock, Spider-UK from Earth-833 and new recruit to the Captain Britain Corps. He finds out what the baddies are up to pretty quickly and decides to do something about it. It’s cool to see a spider working with the Captain Britain Corps and I think that will prove useful especially since this Spider has awesome technology at his disposal like the scanner (on Otherworld) and his talisman.

I liked that this issue was set up like the Edge of Spider-Verse mini-series if you have been keeping up with that, if not the reviews are on the site. Since this story is only technically half an issue, there is no fluff and it is straight to the point, and I can’t wait to see more of this guy. This is like an 8 page teaser and I keep getting more and more excited for Spider-Verse.

Giuseppe Camuncoli had art duties on the whole issue and it looks great. He isn’t my favorite Spider-Man artist, that’s Humberto Ramos, but the thing about Camuncoli is that his artwork is always consistent and in the case of this issue, it’s consistently great. Especially since the tone of the two stories were so different, the first part is a little bit more upbeat since it’s a team-up while the second issue is a little bit darker because spiders are being hunted all across time and space. It’s nice to see an artist able to hit all the bases in a single issue.

Rating: 6 (Out of 7) – Both stories are fun and the artwork is great. I wouldn’t miss this issue if you’re looking forward to Spider-Verse.