Ages ago, when I first started using Twitter, DC ran a group/hashtag #DCReader. From that tag, I got to engage in a lot of interesting discussions and meet some great people on the service. The feature was short-lived though, and it has been some time since I’ve such engaging comic conversation Twitter on a weekly basis.

Instead of moping about it thought, I figured I would start an initiative and get the ball rolling myself. That’s why I want to introduce the Comic Book Club. A weekly discussion, every Wednesday about comics. The conversation can focus on newly released comics, big news of the week or just general comic talking points.

To encourage proper discussion, all readers should tag their tweets with #CBCT (Comic Book Club on Twitter) it’s short enough to not steal away too many characters and diverse enough not to be confused with other discussions. This way not only do you get to partake in the discussion, but can hopefully find other interesting comic readers to follow. 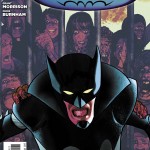 For theÂ inaugural CBCT, I asked last night on Twitter what the big book of the week was and got several responses pointing out Batman, Inc 5. And if you know me, you know I never turn down the chance to discuss Batman!

With that said, I just had a few questions to get the conversation started and for folks to start talking. Be warned (if not obvious) there will be spoilers!

These are just a few questions to get the ball rolling. Feel free to add to the conversation. Ask new questions and provide follow-up to others.