Beware The Batman: Season One Part One Review

Batman is an extremely versatile character, perhaps one of the most versatile in all of comic-dom. I don’t think anything proves that more than his past twenty years in animation. He starred in the genre-defining, Emmy-Award winning Batman the Animated Series, which proved that a children’s cartoon could tell adult stories. Then came the futuristic Batman Beyond, which cast the original Batman as a mentor figure and it worked extremely well. Then came The Batman, which dealt with a younger Batman and more recently Batman: The Brave and The Bold which returned the character to his lighter and campier roots. All of those shows had their own merits and catered to a different section of the fan base. They also highlighted Batman in a different manner. 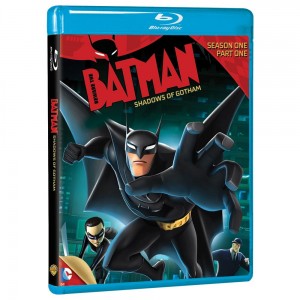 Enter, Beware The Batman. The Caped Crusaders’ 5th major animated series in 22 years. Beware the Batman‘s big two hooks/gimmicks for a new Batman animated series is that it is the first CG series for the Dark Knight, and it would focus on lesser known elements of the Bat-mythos. This can be seen in the fact that instead of a Robin or a Batgirl, Batman’s partner in this is Katanna, and they don’t do battle with the likes of The Joker or Catwoman, but instead Magpie, Lady Shiva, and Professor Pyg and Toad.

On the latter front, the show does a great job. By the end of the initial 13-episodes, the villains are pretty fleshed-out and do stand as legit threats to Batman. Katanna who drives the character-progression of the show is also a nice stand-in for Batman’s typical sidekick. She works out better because is older and tried in many fighting skills. She also has a much darker background and origin that ties into many characters on the show. It makes for a fun ride as details are revealed and to see how the world and characters react to these revelations.

On the former front though, the CG animation is a mixed bag. First, and this is something that bothers me with a lot of CG-toons, is the world just seems so sparse and barren. You see a Gotham City with no one on the streets, highways with only 5 cars on the road (and yes I counted), and interiors that just seem to be different colored warehouses from time to time. I get that they don’t have the budget for a living, thriving city, but it is extremely noticeable especially since it’s hard to hide in a Batman series as he spends so much of his time on the street. 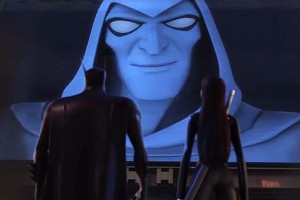 This also spills over to the characters in certain regards. A lot of the characters wear very muted and singular colors for their costume. Batman makes sense for being in all-black (Though always a fan of his more colorful costumes), but Bruce Wayne is also decked out in all-black. Katanna as well dons all-black in both her civilian and superheroine costume. On the subject of her costume, it is extremely lazy that it is simply her wearing a domino mask. She doesn’t fix up her hair or wear a different costume, just a domino mask! Alfred is mostly in black. Anarky is decked out in all white. Magpie is shades of black. I get the simplified design for the animation but it does make it feel a bit cheap at times.

What doesn’t look cheap though is the transfer quality of the release. It helps that the show is already produced in high quality, but the picture quality is really nice. It didn’t stand out as anything special to me, but took a break for a few days and when came back, it really started to pop. I think it was watching streams via Netflix that really helped. Also, the show’s lack of color really works in its favor in HD it seems.

The episodes or first half of the season is actually a lot more serialized than you typically get in a children’s show. With each episode building on events from previous episodes and recurring villains and allies being part of a larger plot. At the same time, the show does a good job of making each episode feel like a completed story. While I wouldn’t recommend jumping in randomly, it wouldn’t hurt your enjoyment of the show. 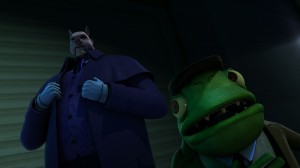 On the flipside though, the show does take a handful of episodes before it finds sure-fighting. The first four or so episodes aren’t bad, but I felt that the show wasn’t comfortable in its own skin. By the end of these initial 13-episodes though, you get the sense that the show understood what it wanted to be, its characters and the world it was creating. What I’m surprised about is how often the shows villains are re-used in just these 13 episodes, with Magpie, Anarky, Lady Shiva, Silver Monkey, Professor Pyg and others appearing at least twice, with some crossover. It helps build up the threat of your Rogues’ gallery, and also love when villains don’t exist in a bubble. The final episode does introduce one of Batman’s big bads in a more meaty role and curious to see where they go with that.

Which brings us to the series proper, this Blu-Ray/DVD release is right now the only way to see the final two episodes, “Attraction” and “Fall” from the first half of season one. Even with the release, we’re still completely in the dark about the future of the series, and this Blu-Ray doesn’t seem to offer the most confidence that it will continue.

I’ve seen some barebone DVD releases in my time, but this is the barest one ever. It’s so barren that they don’t even include trailers for other products. I mean nothing! The only thing on the disc is the 13 episodes. No extras. No trailers. No commentary. Seems like no language options. Nada. It really does seem like it was just released to appease fans.

Review 6 (out of 7) : The package is extremely barebones, but the show isn’t. You’re getting a pretty solid set of 13 episodes for about 20 bucks. You really can’t go wrong. Let’s hope they wrap up the cliffhanger!