Beware The Batman Episode 2: Secrets – A new female villain, Magpie, kidnaps Batman,  who must decipher her multiple personality disorder in order to outsmart her.

Beware the Batman is a different type of Batman show, but that doesn’t mean it doesn’t have some of the default dynamic for the Dark Knight. Take the second episode, Secrets, which has the introduction of the villain Magpie. Since the show will be devoid of Catwoman, she gets to fill-in the not-so complete villain who has a liking for Batman role. Granted that is a bit of an oversimplification of her role, but it does feel like trying to make her Catwoman-lite. 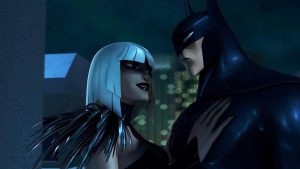 On the bright side, her character and background is a lot more robust. And in a lot of ways tragic. Without going into too much spoilers, we discover that Magpie is a dissociative personality of Margaret Sorrow. We learn through Batman and Bruce’s detective work of her time at Blackgate and the experiments conducted on her. She has a bittersweet ending in this episode, but really can’t wait to see more of her.

This episode also marks the debut of Barbara Gordon, who doesn’t really do much but gives someone else for Commissioner Gordon to bounce off of.

Speaking of the ole Commish, his contentious relationship with the Batman continues to develop. They are more at odds with having to work with each other right now than straight up being combative, and it’s still an unique dynamic but not one that makes me happy. 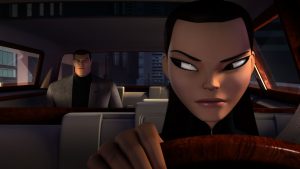 The final subplot of the episode features Alfred revealing that Tatsu is actually not just hired help, but his god daughter. Bruce does his homework it seems. The episode ends with Bruce beginning his “test” for her, and that’s where we’ll pick up next time!

The second episode does a good job of introducing another unorthodox Bat-villain and building up the supporting cast of characters. Shiny, shiny!