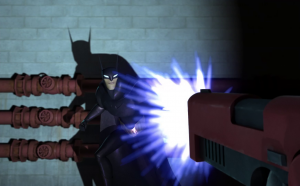 The Batman makes his debut.

The first episode of Beware The Batman quickly sets the table that this is unlike any other Batman we’ve seen in animation. For one, while we’re use to it in the movies, this is the first animated Batman to sport an all-black outfit. It is also the only Batman series to be fully computer animated even though there was that Batgirl tease at the end of Batman: The Brave and the Bold.

Aesthetics aside, there is a lot more that makes this series standout. From Batman’s usually supportive father-figure Alfred being portrayed as a more hard-nosed trainer. We are introduced to him in this series by staging a break-in on Bruce and then scolding him for being too slow to react and exerting more effort than needed. It’s a dynamic that is a bit more common now with the debut of Gotham a few years after, but at the time it was new territory for Alfred and Bruce’s relationship.

Alfred isn’t the only supporting character to get some changes, the first two villains on the show don’t pull from the typical Batman gallery… at best, these would be C-tier villains but Professor Pyg and Mr. Toad are strange enough to catch your attention while also letting you know that this series will be a deep-dive. 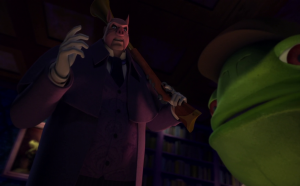 Finally, there’s the big hook at the end of the episode that Batman won’t be flying solo on this adventures, but instead of pulling from his usual partners such as Robin, Nightwing or Batgirl, we get Katana. There isn’t much to her in this episode except we learn that Alfred recruits her to aid both Batman and Bruce Wayne.

The first episode of Beware the Batman does a solid job of setting up the show and conveying that this will be a new and different adventure for Batman.