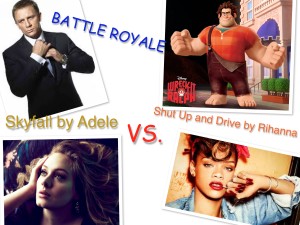 Welcome to Battle Royale!
Each month I will pick four songs that will battle for your votes! Week 1 two songs will go head to head. The following week two brand new songs will enter the arena! Then by week three the losers of week 1 & 2 will try and not be classified as the worst song of the month. Finally the last week of the month the two winners from week 1 & 2 will face off to claim the battle royale crown! May the best song win!

We will start with a song from Wreck-it Ralph! Shut Up and Drive by Rihanna. Which should be interesting with the movie being released this Friday! Wreck-it Ralph should be a fun film for all the video game nerds out there! What better song then to have a big name like Rihanna singing?

The Challenger this week will be Skyfall by Adele! Yes another big name female artist putting out a song for a movie! The new James Bond movie has a great song for its title track. I will let the readers decide who will win the battle!

Now it is time to decide! Wreck-it Ralph! or James Bond? Adele or Rihanna? Shut up and Drive or Skyfall?! You decide!
READY! SET! MATCH!