Batman: Bad Blood continues the Batman/Damian story that begun in Son of Batman. This go around it puts a bigger focus on Dick Grayson and introduces the characters of Batwoman and Batwing, but does a semi-fresh coat of paint make for an interesting movie?

1) The Batwoman – Even though this movie is titled Batman: Bad Blood, Batwoman is really the heart and soul of the movie. As the character given the most backstory, and most room to grow, her journey throughout the film feels rewarding by the end. It was also something different while her past is tragic it isn’t nearly as tragic as Bruce or Dick or messed up as Damian, and she still has a semi-useful support system with her dad who is eager to help. 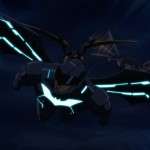 His design really shines in motion.

2) Batwing, The Person Not the Plane – Unlike Batwoman, Batwing inclusion feels… not shoe-horned but lackluster. They build up something with his father and keeping secrets and then… he’s Batwing. Like that’s really it. He doesn’t have a proper arc. He doesn’t have the moment where he chooses to embrace a hero. And being named after the plane is never really given a reason but does bring out some humor.

3) Bad Blood – The title refers to the legacy of this film. At it’s heart, it’s a parent/child tale. Bruce and Dick. Bruce and Damian. Lucius and Luke, Katherine and Jacob and (Spoilers), Talia and Damian. The movie’s theme seems to be that we aren’t necessarily defined by our blood bonds, and we are free to make our own path in life.

The biggest part of this arc is of course Dick embracing the identity of Batman during his absence. Something, he has tried to avoid his entire life. And while he does a decent enough job of covering, most around him know he could never fill those shoes. Not because he isn’t a worthy successor, but he has surpassed his mentor’s shadow. 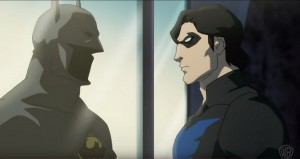 Shadow of the Bat.

4) The Wayne Legacy – Damian continues to be the thread that binds these movies together (Son of Batman, Batman vs Robin and now this) as his internal conflict between the desires of his mother and grandfather continue to clash with those of his father’s ideals. He is a boy trying to reconcile two very different ideologies and navigate the world.

I would say wasn’t so keen on Damian in Son of Batman, but seeing how he has evolved (and will continue to evolve) over the course of these 3 movies have been extremely rewarding. I find his moments with Bruce in this film to be genuine and well-earned after all they’ve been through together.

5) A Story in Acts – There have been more than 25 of these movies now, and they all run roughly about 70 minutes or so. And it’s always been a balancing act to get a good flow going and feel like a complete movie. Batman: Bad Blood isn’t one of those movies that excels in that regard. The movie builds up well through acts 1 and 2, but it’s like someone plotted those out before realize they had to finish the movie. It feels like the movie needed an additional 10 minutes or so after act 2 to really drive home, Bruce’s transformation after his rescue. Perhaps, an assignment where we see Bruce, Dick and Damian working together. 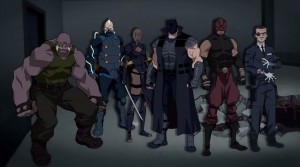 These guys are in the movie too, but really not much to do.

Instead, we get a Batman who kind of feels like a massive jack-ass, and sure it is eventually paid off, but we really needed more time with that character to truly feel rewarded by the final confrontation.

6) Nunjas – I’ve said it since Justice League War, the action in these films have been top-notch, and sometimes the stars of the entire ordeal (for better or worse). And it is no different here as we get a ton of stellar action setpieces. The best being when Batman, Robin and Batwoman has to infiltrate Talia’s stronghold, which happens to be a Church. And are confronted by nuns wielding katanas and machine guns. It’s an unique visual. It’s fun and engaging. There’s a ton of moving pieces. It just makes for an amazing 10 minutes or so.

7) Production Values – I’m still not keen on Jason as Batman, but the rest of the cast is rock solid. Stuart Allen is finally coming into his own as Damian, but you can kind of hear his voice going through puberty in this movie. Curious how much longer he has.

But I was surprised at what Yvonne Strahovski bought to the role of Batwoman. I mean been a fan of hers since Chuck (and then 24), but there was a ton of energy, confusion and hope in her voice.

As for the visuals, I’ve complained about this before. But really not keen on the fact that DC has settled on a “House-style” for these specials. Some characters look good, some don’t (I still hate Talia’s design, she’s all boobs), but really it’s just kind of boring after a while. I use to love the different visual flairs that each special would have. Now we kind of know what we’re gonna get and after 5-6 films it’s so passe.

Review 5 (out of 7) – Batman: Bad Blood is the best Damian-centric DTV to date, but some odd pacing issues and samey art-style keeps it from being truly special.