Bar Banter: What is a System Seller?

In light of the recent Wii U sales figures, I’d thought I dust off an article I started nearly a year ago to this day.Â

What is a system seller?

It seems like a fairly simple question if you take it at face value, any game that sells systems would be a system seller. But there has to be more to it than that because a case could be made that every game is a system seller even if it only sells the system to 1 or 2 people, it sold a system.Â There’s a reason why games like Super Mario, Halo and Grand Theft Auto III are considered system sellers while stuff like Metroid, Forza and Resistance aren’t. I’m sure there are people in the world who buy consoles for the latter 3 games, but they aren’t system-sellers. Why is that? We try to examine and come up with a reasonable conclusion.

Does it need to be original?

This is the easiest question, and the short and sweet of it is no. We’ve seen original games/concepts come out and go on to become major hits/system sellers. We’ve seen sequels from established franchises that get people invested in a system again. We’ve seen games from good, but not spectacular selling franchises, blow up over night to become the next big thing.

It doesn’t need to be original. Just be good.

Is it a Regional Thing?

Does a system seller need to be a great seller globally?

The video game industry for the most part has 3 dominant territories, Japan, PAL (Europe and Australia) and North America. Sure games are sold elsewhere, but those are the three that make up the bulk of hardware and software sales.

There are some games that have global appeal, mostly from the likes of Capcom and Nintendo like Resident Evil, Super Mario and Wii Sports. These games tend to do well across the globe, but then you have surefire hits like Monster Hunter and Dragon Quest, which do remarkably well in Japan, but hardly make a dent in the West. On the other hand, titles like Call of Duty and Halo have yet to really find any footing in Japan while they dominant sales charts in the West.

Does it Need to be Exclusive?

This is an interesting one, you would think that a system-seller would have to be exclusive to the system to sell it, if you could get it elsewhere why bother?

But that doesn’t seem to be the case, we have seen titles that were multi-platform become defining titles for a system. We don’t even need to look too far into the past for an example, while Call of Duty releases on almost every platform under the sun, there’s little doubt in many minds that it helps pushes the sale of the Xbox 360 more than any other console.

Why did that happen? Microsoft didn’t start making contracts with Activision for early maps until later on in the series, but it still becameÂ synonymousÂ with the console. Other times in history, stuff like Mortal Kombat on the Genesis and others of it irk, have defined fanbases for their respective consoles while being on others consoles at the same time. The source of this seems to be offering a leg up on the competition in some distinct manner. In the case of Call of Duty, it seemed inspired by the fact that at the time Xbox Live was a far superior online interface than the PlayStation Network and Wii missed out on the original Modern Warfare at launch. While Sony has done a commendable job in playing catch-up this generation, the early advantage cost them. On the other end, and this happens a lot, Nintendo’s own shortcomings proved to be their undoing as they infamously didn’t allow blood in the Super Nintendo port of Mortal Kombat, making the Genesis version the de-facto go to home version, and creating a stigma that still hangs over the company’s head until this day.

As we see, a game doesn’t NEED to be exclusive to a platform to become a system-seller, but it either needs to play to a clear strength of the console or be handicapped in the other versions.

Does it Need to be a System Showcase?

This one can come in many forms: It can be a graphical showcase, a technical showcase or even plays to the unique strengths of the platform. 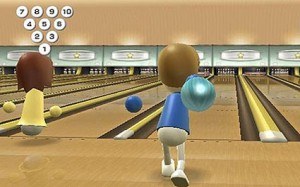 A game should be a system showcase in some fashion. Games like Super Mario 64 ushered in the 3D gaming era and made great use of the N64’s analog controller. Gears of War was the first game that truly looked amazing on the Xbox 360 and allowed for co-op gameplay online. Wii Sports was the reason to own a Wii and showcased the Wii-mote more than most games on the system.

However, you don’t NEED to be a system showcase though. Games like Call of Duty that blew up this generation doesn’t really have any defining characteristic of the Xbox 360 or PlayStation 3. They aren’t the best looking game and while online is the strongest part of the franchise isn’t unique to the franchise nor was it at the time of Modern Warfare’s release. Other games likes Grand Theft Auto III would usher in the open-world movement of the last gen wasn’t quite the PlayStation 2’s showcase title in any meaningful manner.

Then you have games that are system showcases but don’t necessarily help to move systems. Games like Rayman Raving Rabbids and Red Steel 2 made terrific use of the Wii’s controller, but neither set the world on fire in regards to sales. Games like Lair, Heavenly Sword, and Kameo were early lookers for their respective consoles, but again weren’t the reason that people were picking up the system. Hell, King Kong, which proved to be an early example of how to game achievements on the Xbox 360 (it’s a showcase in its own way!) didn’t do much either.

A more recent, and meaningful example for the purpose of this article, would be ZombiU. A game that perhaps makes the best and strongest use of the Wii U’s GamePad to date. It has also released to a fairly glowing critical and consumer reaction, but hasn’t really helped push the sales of the Wii U in its early days nor has it’s strengths help push it into many homes.

Accessible has kind of become a dirty word in the gaming world. Generally when gamers hear it, the initial reaction is that the game has been neutered to appeal to the “casuals”. Leaving that stigma aside though, I thinkÂ accessibilityÂ plays a vital role in being Â a system seller.

Games like Tetris, Grand Theft Auto III, Call of Duty 4: Modern Warfare, Wii Sports, Super Mario Bros, Sonic the Hedgehog and countless other “killer apps” all have game play and ideas that are accessible to the masses. Some will argue that some are more accessible than others, but they are all accessible in their own rights. There are games that build on all of these formulas, making it bigger, better, faster, sleeker, tougher, edgier and 100 other adjectives, but very few of them come close to the success that the originals achieve. Partially for being the original, but the other being that simplicity is key in drawing in an audience.

I’m sure some will argue against this to a degree because there are some system sellers that aren’t as readily accessible, but you would also notice the gulf in sales between those titles and the ones above. Stuff like God of War, Gears of War, Uncharted, The Legend of Zelda and others are generally considered system movers, but sell about a quarter of some of the franchises from the first list because they aren’t nearly as accessible.

Either way, accessibility plays a key part in being a strong system seller.

Does it Need to be a Killer App?

Since the purpose of this article is trying to define a system seller, we’ll focus on defining what a killer app is. Above, I mentioned a game “showcasing” the abilities/functions of a console in different ways be it technical, graphically, interface, online or what have you. I noted that a game doesn’t need to be a showcase title to be a system-seller though as we saw in the Call of Duty example, and I would add stuff like Wii Play to the mixture.

On the other hand, a killer app NEEDS to be a system showcase, and not just in a single aspect. A killer app needs to be a game that defines the characteristics of the console. When you think about something like Wii Sports, it’s entire design is owned in a large part to the Wii and its controller. At the time, it couldn’t have been done on any other system. The same could be said of Gears of War both from a technical standpoint, and from it’s heavy reliance on Xbox Live for Co-op play. The Uncharted series is a prime example of a game that unleashes the power of the PlayStation 3 and wouldn’t be possible on either of the other consoles.

If you follow along, that means that a killer app has potential to be a system-seller, but doesn’t necessarily end up being one.