The A-Z of Geek Cinema: V is for Vanilla Sky 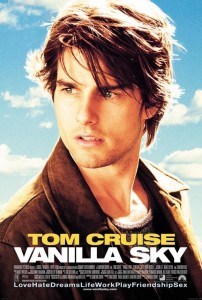 Pop culture is a funny thing. It invades almost every moment of our lives, to the point that now we compare our real lives to the fictional ones we’ve read/seen/heard. How many times a day do you quote The Simpsons, use a song lyric as a way to get across an idea, say something like “this is just like that scene from [x movie]”? Where pop culture once reflected the values and mores and concerns of the world, often in ways we didn’t expect or couldn’t see, now our values and mores and concerns originate in pop culture and spread outward. The internet only exacerbates this feedback, to the point that its now looping back in on itself and we’re nostalgic for nostalgia.

Cameron Crowe’s 2001 film Vanilla Sky is very concerned with this idea, and for good reason: David Aames (Tom Cruise) has constructed his life around the things he owns, the things he sees, the things he loves. He replaces the love he never got from his father with stuff, with culture. And when his life falls apart, when his friends and lovers and everyone goes away, when he has nothing to turn to, pop culture abandons him. Or does it?

Adapted from the 1997 film Abre Los Ojos (which Penelope Cruz reprises her role from), Crowe takes what was a dreamy and very impressionistic film and puts his own concerns into it. Long a pop culture devourer, and at the center of some of his own contributions to such (he wrote Fast Times At Ridgemont High, and wrote & directed Say Anything…, Jerry Maguire, and Almost Famous), the film is full of the music he likes, the art he likes, the things he loves. One can argue that David Aames contains a lot of Crowe in him. But Vanilla Sky shows how such love can go dark. Just look at the early party scene in David’s loft: there’s art everywhere, a reconstructed guitar from Pete Townshend, movies projected on the walls… but his life is empty of anything like love or feeling. He goes through his motions everyday, ignoring the yawning pit at his very center, his “special friend” Julie (Cameron Diaz) there to satisfy his “needs”, and all the money in the world thanks to his inherited company. 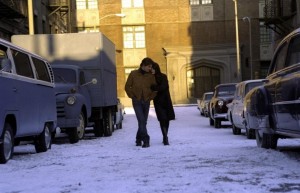 Meeting Sofia when he does is a catalyst for him, making him see something that he doesn’t have, that he wants. But even so he can’t help treating her like a prize, an object to be won. His very act of meeting her and spending the night was almost as a needle to his friend Brian. It’s only after his accident, after he begins to lose himself, that he learns what he is missing, what he’s lost. And the twist… oh, the twist (which I don’t want to reveal here) just adds another layer. A man who has everything he wants, and has had a life built out of what the world has shown to him… what sort of life would he build for himself?

After the feel-good, almost lo-fi charms of Almost Famous, Crowe’s hard turn into very challenging and interesting scifi took people off guard. The critics were mixed on Vanilla Sky, though it was a box office success. Some people reacted very strongly against it; whether it was the weirdness that unexpectedly invades the movie, or that it hits a society obsessed with the objects it loves little too close to home, who can really say? All we really need to do is 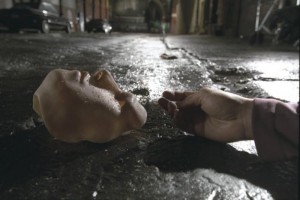