The A-Z of Geek Cinema: P is for Prometheus 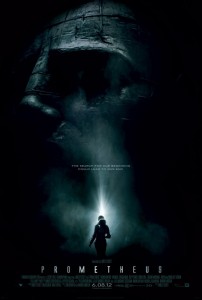 Anticipation can be a killer. On one hand, your excitement can be built up so much for something, can be hyped up so high, that there is no way your expectations will be met. And in the same vein, maybe what you were expecting is completely counter to what you get. Your idea of how a movie should/will go isn’t the same as the way it actually does go. Hype, anticipation, it all can work against you. Ridley Scott’s 2012 film Prometheus had a lot to live up to; the director of Alien and Blade Runner working in scifi for the first time in 30 years and doing a semi(?)-prequel to his first big hit, working from a script that was cowritten by one of the creators of Lost (speaking of hype and anticipation being let down…), an R-rated scifi/horror film of intelligence at a time when there’s been a dearth of such, some very well-cut trailers which emphasize the mystery of it all. The deck was stacked against Prometheus almost from jump street.

But was it fair? The filmmakers made claims about how the film was about “everything”, how it contained “Alien DNA” without being a direct prequel. While both of these are strictly true, the reality of the situation is the film has been seen as a considerable let down. Characters that change motivations at seemingly the drop of a hat, really dumb actions by ostensibly smart and capable people, plot twists that seem arbitrary versus organic, religious overtones and vast import ascribed to things that haven’t earned it; the screenplay is full of major problems. Scott’s visual sense is, as always, impeccable, as the film looks beautiful. Vast foreboding tableaus, eerie atmospheres, and alien vistas dominate the screen. If nothing else, the film is a triumph of production design.

But again, we come back to the script. The original script was written by Jon Spaihts as a straight prequel to Alien. There was no hiding behind talks of “DNA”, it had actual facehuggers, chestbursters, and everything in it. He conceived of the medpod/”caesarean” scene as the heroine (named “Watts” in his version) frantically racing to remove a xenomorph embryo before it gestates and kills her; in fact, the idea was that the android David purposefully exposed her to a facehugger in order to get to this point. Like in the earlier films, the idea was the Company wanted a live alien specimen. David was actually a much more openly malevolent figure originally, whereas in Prometheus he comes across as less evil and more ambivalent. 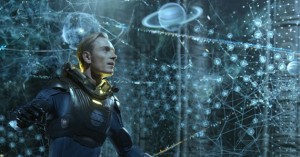 Then Damon Lindelof comes along and takes out everything that makes it overtly an Alien prequel, while layering over his pet themes of religion and father issues, and it all goes to hell. The black goo that seems to function however it’s most convenient for the script was his invention, which smacks of a first draft idea which should be fixed in subsequent drafts. Lindelof did what he was hired to do, which was make it less of an Alien prequel and more of a new franchise starter, but he didn’t seem to cover up its origins enough. The original script pokes through all over the place, which accounts for the weirdly schizophrenic feel of the film. Parts of it are action/horror-esque, much more in-line with the original Alien, while other parts are more ponderous and almost pretentious, which fits with Lindelof’s work on Lost. Spaihts’ script is available online, so you can make the comparison yourself.

All this said, the idea we all had of what Prometheus was going to be ended up vastly different from what we got. I’d venture to say if the film hadn’t been hyped up as much as it was, the backlash against it would not have been as great. Script problems aside, there’s a lot to like in the film, both visually and in some of the ideas therein. But because we all expected another masterpiece, the beautifully shot B-movie we ended up with actively angered us. Who is to blame for this? Maybe no one. Maybe everyone. I can’t really say. Hype is a tricky thing.

But, at the very least, we know that if you see an alien snake thing, you SHOULD NOT TRY TO PET IT.