Batman gets the Telltale treatment. It’s a bit of Batman: Year One meets The Long Halloween as we get a relatively new Bruce Wayne taking on the mantle of the Bat and facing down with the crime and corruption of Gotham City. Here’s our thoughts on episode 1.

1. That Telltale Funk – Let’s just get this out of the way upfront, this features the same problems that most Telltale Games feature. The engine is really just janky at this point. There’s slowdown during conversation. Awkward animations when folks walk and talk. A scene or two where the audio just stopped. Weird transition during choices and actions. I get that they like churning out these games but perhaps take a team aside and have them update the engine this is getting ridiculous.

2. Comic Look – While the graphics aren’t up to the level of the Arkham games (and trust me, this comparison will come up again), the game does a decent enough job with its artstyle to kind of mimic a living comic book. It’s really impressive when you see Batman in costume. 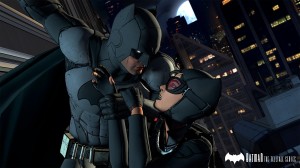 3. Being the Batman – At the same time, being Batman isn’t nearly as grand in this game. The Telltale engine isn’t really designed for combat scenarios, and Batman is really all about that. The combat is mostly quicktime events with some button prompts here and there. As far as I could tell, very few combat scenarios had fail-states probably just alternate animations and continued to play out. The highlights for me though were the parts where you got to play a more cerebral Batman. The first episode features one crime scene that you need to investigate and piece together the crime. Another has you scouting a location and figuring out the best course of action to take out a room full of armed mobsters.

4. Batman Year One… Again – People complain about Batman’s origins being done to death in media, but Batman’s first year is getting up there as well. The seminal Batman Year One from the 80s, Nolan’s Batman Begins, Scott Snyder’s recent Batman Year Zero, to a lesser extent The Batman and Beware The Batman dealt with a younger, more inexperienced Batman. While this game mines that territory once again, I don’t mind it because it allows them the option to allow him to make mistakes and for the player to make decisions. Also, I think dealing with the criminal element while not as iconic as The Joker or Two-Face and the rest does make for a better capacity to tell an early story. 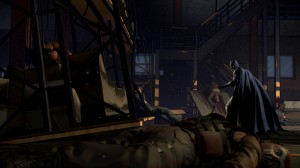 5. Voices of a New Gen – The experience wouldn’t be worth a damn if not for the voice-cast bringing it altogether. While we shall always have visions of Conroy, Hamill and the likes in these iconic roles, I’m on-board with almost everyone in the game. Troy Baker gets to show his range in the Bat-verse (previously playing The Joker, Arkham Knight and LEGO Batman in video games and animation) as a more gruff sounding Bat and more downbeat Bruce Wayne. Travis Willingham turns in a solid performance as Harvey Dent. With no real hints of villainy, just yet. Laura Bailey does a great job with Catwoman and can already tell have ace chemistry with Baker’s Batman. And Enn Reitel brings that delightful British charm, concern and love to the role of Alfred. Who really is the biggest part of the game since he remains Bruce’s confidant and friend so juggle many hats.

6. The Bat-Family Drama – Telltale Games mostly work with noted properties, but ones that give em enough flexibility to play in the sandbox without necessarily hinting on the core story beats. They are allowed to craft an original story in the Bat-verse, but I just feel like my trust and ability to trust certain characters is tainted by the knowledge of who they are or who they may become in the future. So when I keep Harvey Dent at a distance or try to make quick allies with James Gordon, I feel like those decisions are driven more by my preconceived knowledge of their relationship than anything the game is offering up. It’s really not the game’s fault, but I’m sure others may have that weird disconnect. 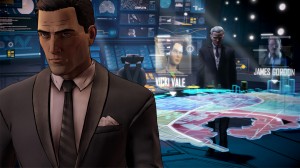 7. The Choice is Yours – This is only episode 1 so I’m sure it will get better, but I didn’t find any of the choices in this game overwhelmingly difficult to make, and it doesn’t seem like I was alone. Of the 6 possible choices in the game, I’m certain half of them were completely lopsided in their outcome. One such choice was like 90-10. Going to the above point, I think most players don’t see Batman as a morally gray character so they make decisions based on that notion, and not what works best in the scenario. I do hope further episodes allow for much more complex and intriguing choices.

Review 5 (out of 7) – Technical shortcomings aside, this is a solid start to the Batman adventure. While it isn’t the most compelling experience of being Batman (check out the Arkham quadrilogy for that), but it does offer a fun experience that focuses on the character and detective aspect of Batman. More importantly, it seems to give a spotlight to Bruce Wayne which is something that doesn’t happen quite as often.