We have finally broken the Jean-Claude Van Damme cherry on 151 Proof Movies. We waited too long it seems. The movie was really enjoyable, which is odd because on paper it has so much going against it, but I guess this is why he still has a career. 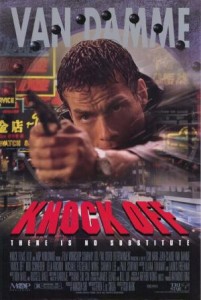 Anyhow, let’s get to the score board!

This movie was awesome. This is what I expect from a 90’s action movie. The acting was..there. The story was silly. The fight scenes were awesome, and really that is the reason we watch these. JCVD doesn’t disappoint with his fighting in this, kicks and punchs and dolleys everywhere. The climax to this was a solid fifteen minutes of intense action, with creative situations involving giant tires, shipping crates, boats, razor sharp lenses and cleavage shots. The only complaint, if you can call it a complaint, is that this movie had some of the weirdest decisions regarding angles of shots. Random close ups and following random objects. For example, our first really weird one was following a foot into a shoe. It may have foreshadowed the imminent kicking but still a weird way to do it. But all in all, this movie was fabulous, if you want to turn your brain off and have a kick-ass good time, watch this. Now.

Judging an action movie is quite a feat. I mean on a normal scale this movie would be knocked down for its acting or whatever JCVD calls what he does. The pacing was a bit bizarre, there were double and triple crosses, and at the end of it all, I really had no idea what the major plot of the movie turned out to be.

On the flip side, this movie delivered when it needed to and that was with action. Sure, it was over-the-top, but it was also grounded. And I know that sounds odd, but you can be grounded and over the top, and it makes for a thrilling scene. Because you wonder… could you actually pull that off in real-life, and it keeps you entertained. Even though the action was great, the most surprising thing about this entire movie is I didn’t hate Rob Schneider’s performance in it. I even thought he was kind of enjoyable.. let’s hope its the booze talking!

It is a worthy action movie, even if completely under the radar.Â

I would have liked to give this movie a 3.5 but I have been informed that I am not allowed to use half scores, even though our averages end up with half marks most of the time. . . Regardless, this was a good movie for our rules, the kicking rule was almost cheating in a JCVD movie. I swear the man does not know how to punch. The Scneidkick Rule, well this was a weird one, he was the comedy sidekick and he is Rob Schneider but he was surprisingly good in this movie. I legit laughed at some of his jokes, which still confuses me. I will actually say this is by far his best movie…..E.V.E.R! Death and explosion rules are always sure things in action movies and this one had a respectable amount of both, though the explosions were green, making me think we should have saved this for March. The only rule that is a little question was our mandatory spoken word rule, this time being “bomb” which was not said once for first half of movie but came back with a vengeance in the second half.

I think this was a fairly good set of rules for going into a movie blind. I think the one that caused us the most headache was the annoying sidekick rule. Since, there were times when debating if he was actually a sidekick, and he didn’t really turn out to be THAT annoying. Who knew he could pull out one performance.Â

The other rules were pretty much on a roll. The death/explosion rules really overlapped a lot of times, but I guess that’s to be expected if something blows up, people are usually in the vicinity. I will say though, we had to make sure the person died on screen or was killed in an act that happened on screen. There were a handful of deaths where people showed up dead, and that really doesn’t count.Â

Finally, the kicking rule.. might as well be the Van Damme rules because the boy kicks like no one’s business. And not just single kicks, you see like double and I think there was even a triple kick moment in this movie. Or it was a double kick that caused death, something along those lines. It will be a good thing with this rule!

All in all, Knock Off will make for an enjoyable viewing sober or drunk. Just don’t expect an Oscar-caliber movie but a solid action flick.