Over the past few years we have seen the war between digital and physical media being waged in all forms of entertainment. The one with the most dynamic battle right now, appears to be the movie business. While the titans of the movie business continue to fight for physical releases, the emergence of services like Netflix, Hulu Plus, Amazon Instant Video and HBO Go have really turned the tide of battle. 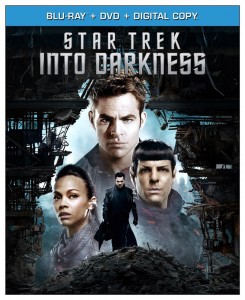 I mean when you think about it, you could get any two of the above services together for less than the price of a new DVD/Blu-Ray release. Which is why Paramount’s announcement of their treatment of the home release of Star Trek into Darkness left me extremely baffled.

Instead of giving fans, a release full of behind-the-scenes features and bonus content, which is the one tool that physical still does a ton better than digital release. Paramount decided it was a wiser play to divide up their features across several store-specific releases. Want to hear what the cast and crew thought of the production of the film? You will need to buy no less than 3 different version to get all of these features.

Now, if you are a fan of gaming, this practice actually doesn’t seem too foreign to you. The concept of store-specific pre-order bonuses has been standard practice for about half a decade. The major difference though, is most gaming consoles have the ability to allow consumers to buy that content at a later date, if the company deems it so.

While I’ve never been a fan of the practice, I think another major advantage gaming has is a thriving second hand market. There are stores and online services that offers you the ability to trade in movies, but how much of the price vs time factor is truly appealing to your average consumer?

What the industry needs to focus on is the things that still draws fans to physical releases. Take DC for instances with their animated features. They are kind enough to include the movie, generally a digital version and bonus content surrounding that film. But in addition, they also give you a sneak peak at their next project (I’m sure movie studios always have a next film lined up), and bonus content from various DC properties (like the original Aquaman and Wonder Woman TV pilot). Dig into the treasure trove of cinematic history, to offer fans something they won’t get by just streaming the film. And I, like many others, would be inclined to be there.