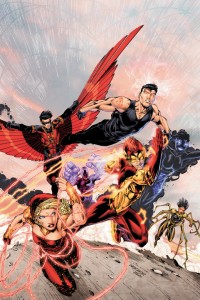 A mansion has caught on fire, but the local reporter assures everyone that the firefighters have it under control. In comes Bart Allen(Kid Flash) to save the day… or ruin it? Bart storms in to save a firefighter who is trapped on the top floor, only to cause a back-draft thus causing the mansion to explode.

Skip to Tim Drake (Red Robin) in New York City, who is reading up on some notes on various meta-teens. Tim quickly finds that he is being watched by N.O.W.H.E.R.E. agents, who have been kidnapping these metas. Tim is always prepared though, having rigged his penthouse with explosives and thus destroying everything.

Now we’re in California where we find Cassie Sandsmark(Wonder Girl) speeding with a sports car that doesn’t belong to her.Â  Cass is then ambushed by N.O.W.H.E.R.E. and in comes Red Robin to save the day. Only, Cassie doesn’t need any saving, as Tim finds out because she is very capable of saving herself.

The book ends when, “half a world away” N.O.W.H.E.R.E. decides to release Project Superboy! MUAHAHAHAHA!

I will admit I was pretty pissed when I found out that Teen Titans history was being erased. Before I got into DC comics, Teen Titans was the only DC book I read, so you can kind of imagine how I felt when I heard about that. I will say though, Scott Lobdell did a pretty good job with this issue. It wasn’t perfect by any means but it was still enjoyable. It was nothing like Red Hood and the Outlaws which is a good thing. A really, really good thing! He manages to keep a steady pace as he is building things(including the team) slowly, but gradually. There is development here, maybe not as much as I’d like to see, but it is there.

Brett Booth’s artwork in this is exciting and you can almost see the energy dripping right off the page. I am a huge fan of Booth, but my only complaint here is that sometimes his proportions can be a little off. Other than that, just really nice and really flowing art here. That one panel where Wonder Girl shows us her powers for the first time is probably my favourite of the book — it almost comes off the page.

Survival Rating: LIVE The book was solid. It wasn’t incredible or amazing, in my opinion. It was solid, so I would really like to see where this book goes.

Recommendation: BUY IT Art was great, writing was solid. There is some plot development here and hey, there are definitely worse books out there *cough*Red Hood*cough*. So for me, it’s a definite buy.