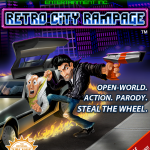 We’ve recently seen an oversaturation in the indie gaming space with games that are inspired and attempt to replicate an 8-bit and 16-bit retro feel.Â It has gotten harder and harder to sift through them all to determine which ones are worth your time and money. Fortunately, it seems like indie developers have become aware of this problem, and attempt to rectify it by crafting unique experiences within these settings. We’ve seenÂ inventiveÂ games like Fez, Gateways and now Retro City Rampage that fits the bill. RCR has mostly been crafted by one man, Brian Provinciano, Â but you would be hard-pressed to notice with the amazing amount of detail and polish that went into this title.

The heart and soul of Retro City Rampage is how it works parodies and references into the game. Not only as throwaway gags but as a core element of the gaming system. RCR draws its main inspiration from the Grand Theft Auto series, and starts off with the main character, Player, setting out to the wonderful city of Theftropolis to experience a land of opportunities.Â However, he ends up working for the main villain, Jester, and fosters in a life of crime. A series of events finds Player stumbling upon a time machine and Doc Choc who mistakes him for The Hero. The rest of the game sees Player pretending to be The Hero and helping the Doc to find various parts of his time machine and various fetch quests for characters. 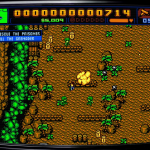 Retro City Rampage, as noted before, is also full of references. It is almost a game in itself to see all the countless references made in the game from retro to modern games, films, music, pop culture, and yes even internet memes. The humor comes from various angles including being self-referential, at times breaking the fourth walls or simply parodying popular game mechanics.Â Comedy is a matter of opinion, but theÂ humorÂ in RCR is hit-or-miss. There are a lot of times when the joke is too obvious or overdone; and there are times when he is spot on. Nevertheless, Provinciano does work in jokes of all types so a lot of it will resonate with people, but it will not work one-hundred percent of the time. He also makes some very obscure Canadian references like PJ Phil from 90’s era YTV and the Trailer Park Boys. I, being Canadian, was very surprised to stumble upon these, but these references will most likely fall short to eighty percent of people playing the game. I respect Provinciano for adding weird content that he’s personally passionate about even though it will confuse a lot of people.

Though all the references in the world, good or bad, wouldn’t make a difference if the game wasn’t good. And I will say what I liked most about Retro City Rampage was the gameplay. I loved how the game dramatically changed styles from one mission to the next making it reminiscent of what Warioware would be like if it was a structured action game and not a series of microgames. The main exploratory style is of a top-down Grand Theft Auto-style; stealing cars, killing people, entering stores, but every mission adapts either the gameplay from another genre or something completely new. Gameplay can range from Metal Gear, Contra, The Legend of Zelda, and so forth. Retro City Rampage also has a cover system which works surprising well with the 8-bit format. 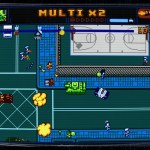 Just like in the Grand Theft Auto franchise, there are cops around to catch you if you do anything overly illegal. I find that it’s extremely easy to get cops on your tail and very difficult to shake them off. You can pretty much only lose cops when you find cloaking devices around town, and this sucks when you’re just trying to explore Theftropolis and go into shops or to your next mission. In addition to shopping for weapons and apparel, you can also visit the arcade which has several games as a homage to current Indie game developers such as Virtual Meat Boy which takes on Virtual Boy style, Bit.Trip Runner, and Epic Meal Time which is played like the Test Your Might games from Mortal Kombat. You can also visit the Casino and all the games there take cues from Super Mario Bros. 3 minigames. There are timed challenges that you can find around town that involve you blowing things up and causing carnage which is usually pretty straight forward and not that interesting. There are collectibles too, like loot bags, invisible walls and game codes.

Theftropolis is a well realized and incredibly detailed world, from billboards to buildings, even the random nature of citizens roaming the street. Sometimes you will see them doing some funny stuff, such as break dancing in the middle of the street. However, sometimes scenes can get so pixelated that it takes a moment for your eyes to adjust and figure out what’s what on screen. You can change your screen type and loosely modify the controls to your liking. There are some very neat options to choose from when you change your screen like a variety of old-school televisions, but my all-timeÂ favoriteÂ is the Game Boy filter. It’s so impractical, but it’s amazing that he put it in there.

The chiptune music in RCR is fantastic. There is quite a lot of it and it’s very catchy. Retro music is also something that can be a hit-or-miss, and fortunately the music in RCR resonates with me very well.

There’s no doubt that Retro City Rampage is filled to the brim with content, whether it’s all for you is a different story. It’s actually very surprising that RCR is only around 30 MBs for so. Regardless of what your tastes are though, you’ll find something in here for you. The controls are tight and the music is great. Retro City Rampage is captivating and flawless in its design. It’s very quirky and theÂ humorÂ is on at all times. RCR is worth playing through just to tap into your own personal nostalgia.