Odd is a fitting name for this movie and its titular character, Odd Thomas. The movie is a mash-up of genres being part 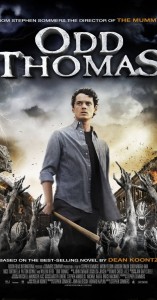 supernatural thriller and part mystery/detective story. Mixed in with a tone that is often times playful while being grizzly right on its trail. When you mix it all up, and pour it on your plate it comes out looking like a mess, but you might enjoy the taste.

Odd Thomas starsÂ Anton Yelchin as well Odd Thomas, a man who is capable of seeing the supernatural and some “powers” they grant him. He lives in a small town ofÂ Pico Mundo, California with his girlfriend, Stormy, who he is destined to be with forever. He has the support of the local police chief, Wyatt Porter and a random assortment of minor characters who pop in and out of the story.

Now the story is where this movie starts to fall apart for me. See the start of the movie suggests that Odd Thomas is able to see dead people, and they are able to communicate with him in some fashion. But in order to move the plot forward, since he is trying to be pre-emptive in this film, he begins to get future predictors. First off is a very spot on collective dream that allows him to see that a group of bowlers will be murdered. A dream he shares with another resident in town. Then there are the “bodachs”, creatures who feed on mayhem and death. Though their purpose in this film seems to be sitting around waiting for all of this to happen. They explain it away with one-line, but still makes no sense to me. Basically, they are secretly forcing Odd into this situation, but if he is going to corrupt their plans why take the risk?

That’s the supernatural part of the film, the mystery aspect doesn’t play as well either. While it is a bit more straight-forward with its narrative, the ultimate pay-off just falls flat. The purpose of red herrings is to mislead the audience, but gives plausible cause. Not necessarily play it straight and use a cheat to make the elements of the film make sense.

Thus far, I could understand if you were a bit turned off by the movie so why do I think some may enjoy it? The cast. Anton Yelchin does a terrific job as the lead, Odd Thomas. He has Â his heart in the right place, but you can also tell that he is a bit of an aloof and a danger-seeker. Williem Dafoe gives one of his most subdued jobs in recent memory for me, and it works. He always oozes charisma, and now he can channel it into being an authority figure. Addison Timlin does a fine job as Stormy, but she isn’t given as much to work with. She is sweet and somewhat innocent and love Odd, his quirks and all. But her facial expression is pretty much lovey dovey, worry and smiling. 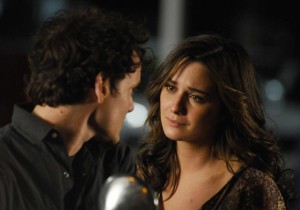 The rest of the characters, do their job, but aren’t really given a ton to work with since it isn’t their movie. Minor spoilers, but Patton Oswalt has the most random cameo. Like it feels it’s going to be a bigger role in the movie, but it’s pretty much an isolated scene that could have been cut.

Review 4 (Out of 7) The cast is extremely likable in this. The film pulls itself together enough by the end to pack an emotional punch. It may not always been the neatest package, but you won’t be wasting your time checking it out.Â