Power Hour: Batman: The Brave and the Bold Wii

For those of you with memories longer than that of a gold fish, you may remember way back when in Sept when we did a review of the DS version of this game. Its taken some time and effort (there were a lot of games this fall!), but finally got my hands on the Wii version of the game. How does it stack up? Well after an hour in, I’m here to share my thoughts!

Batman: The Brave and The Bold, if the name REALLY doesn’t give it away, is based on the hit cartoon series, and it shows through and through. The game takes its artistic cues from the series as well as its voice acting and sense of humor. The package comes together nicely as it seems like you are playing the cartoon. You get some witty banter between Batman and Robin (so far the only two playable characters) and it is chapter specific so far as they spend most of the first episode arguing over the identity of the mysterious cat burglar and Batman’s blind spot for a certain femme fatale. So if you are a fan of the series, the game will hook you simply with its charm.

But how is the game play? Well it really is just a beat em up, but a beat’em up that is smart enough to keep the fighting mixed up. Batman has a wide arsenal of moves on his side including power smashes with motion controls. Which works surprisingly well since it only really asks you to shake doesn’t matter the direction nor the force, and isn’t a move you NEED to rely on. Batman has the standard punch/kick combo and air combo as expected in a brawler. And the screen clearing maneuver you earn over time which is attached by shaking both the Wii-mote and chuck at the same time.

Where the true variety comes in is the “characters” of the game. As mentioned before, you are able to select between Batman and Robin (so far) from stage to stage, and while there is little difference between the two, Robin does come with more gadgets. Then you get to choose a tag partner, as of the writing, I am able to choose between Black Canary, Booster Gold, Green Arrow and Black Lightning. Each of these characters offer their own unique abilities, Canary has her screech, Booster uses Skeets and Arrow rains down dozen of arrows on your foes. Then there is the upgrade system, which allows Batman to upgrade and purchase new gadgets including more Batarangs, smoke pellets and the bat light saber belt!

All in all, the first hour has proven to be extremely enjoyable. Granted, there are of course bonus points for being a Batman product and for being a fan of the show, but as a whole, it holds up as a nice looking and solid playing brawler. I’d recommend checking it out whether a rental or on the cheap (I was able to get for 30 bucks). 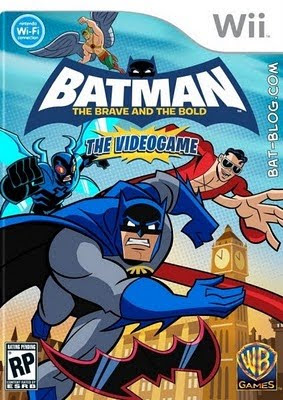