When I attended PAX East, there wasn’t a ton of things pre-planned on my agenda. Really the only thing I knew I had to accomplish was finally getting hands-on time with Metroid Prime: Federation Force. After it’s debut at e3 2015, almost a year ago now, fans have been rather vocal in their dislike of the game’s existence, but I wanted to keep an open-mind. You never quite know when something will surprise you. I had an opportunity to check out a mission in the game and I think it has potential.

The basic gist of it, if you’ve been living under a rock, Metroid Prime: Federation Force is a spin-off in the Metroid franchise that doesn’t star Samus Aran. Instead, it stars a squadron of Galactic Federation who are looking to do something. The mission I played simply had us destroying an energy core on a planet and escaping. There does seem to be a variety of missions from gameplay video though including monster herding. 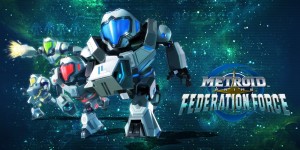 To get into the actual game, it plays like the Metroid Prime series. Again, if you’ve never played, it’s a single stick shooter with a lock-on button. I’m a huge fan of the Metroid Prime franchise, but it does remind you that it’s been nearly a decade since the last proper entry in the franchise and took a few moments to re-adjust to the controls. The single-stick thing isn’t too bad, but because you’re playing as Federation troops and not Samus, they lack her mobility, which makes the game feel slower and a bit more rough for it. For the lore of the franchise, the troopers shouldn’t have anywhere close to Samus’ mobility, but for enjoyment of the game I wished they would have cheated a bit. Perhaps there are some abilities hidden away in the base game to alleviate this? 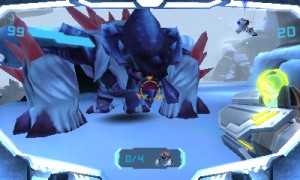 Now the segment I got to play was a 4-player co-op mission (was informed there is a single player mode, but wasn’t on display) in which each team member had to pick their “load-out” at the start of the mission (health capsule, super missiles, etc) and each item is given a “weight” so that you can’t just stack up on all the good stuff. The system also allows each player to create their own role if they choose. Then the mission began and we were given simple objectives that everyone is free to kind of explore on their own. While doing so, you’ll uncover hidden mods and upgrades. The upgrades were simple ways of getting better shots or picking up more charges for your special abilities. Wasn’t quite sure what mods were, though it seems like they make play into the larger game system.

The objectives were pretty straight-forward. Go here and find this. Open this door. Destroy this generator. Escape. Fight Space Pirates. Escape for-reals this time. Again, I’m hoping for a bit more depth in the final game, but imagine it won’t get too intricate in the co-op mode, but would love to be proven wrong.

Even with my complaints, I still think that Metroid Prime Federation Force was fun and can see it being enjoyable with friends. I’m also intrigued by Blast Ball which does seem fun. The biggest question mark for me is the quality of the single-player mode. Is it just co-op missions scaled down or can we expect something more… meaty?

While I was at the Nintendo booth, I thought I’d check out the latest Kirby game, Kirby: Planet Robobot, and came away pretty impressed. I mean the game looks and plays like a traditional Kirby game. Yes, even in the robot mode. 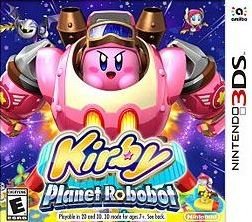 You meet your traditional Kirby enemies and gain the traditional Kirby powers. Though there’s a slightly fun twist on the first “Boss” encounter in the game. Which is probably in dozens of videos but won’t spoil.

When you hop into a mech, which seems to have it’s own designated stages, the gameplay doesn’t change a whole lot. You still acquire the same basic powers from enemies (instead of swallowing them though, you scan them), but you trade it off for less of Kirby’s upward mobility and more just brute force. It’s also a slower mode of travel, but it does offer a slight change to the experience.

What I did find a bit more disheartening, based only on the stages on display, is it seems there isn’t a ton of difference between the Kirby stage and the Robobot stage. Perhaps, it’s the early part of the game just getting you familiar with the controls and differences, but I hope there is a lot more difference in how these stages are laid out.

While I played no other game in their booth, it was nice to see that Star Fox remained a popular destination even though was already released. And the hottest ticket in town was Tokyo Mirage Sessions #FE, which appeared to have the busiest line throughout the 3 days, and hopefully folks came away interested.