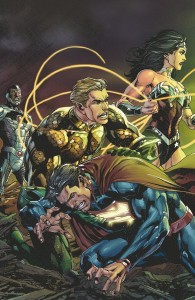 The New 52 offered DC an opportunity to do a lot.. in the year and a half since the reboot thought, DC has done an amazing job of squandering any and all good will they might have achieved with it.

Why bring it up at the start of the review? Well, I fear that the latest Justice League issue may be hinting at a retread of the Mark Waid’s Tower of Babel. Perhaps Geoff Johns is just misdirecting the readers, but right now the idea of someone breaking into the batcave to discover Bruce’s secret vault with briefcases labeled with emblems (because names aren’t his thing?) of other League members seems all too familiar.

Luckily the story doesn’t focus too much on that in this issue, instead we get a very disjointed issue. There seems to be three plots going on in this book, the first deals with the fallout of Batman Incorporated to a degree with Jason (Red Hood) and Alfred starting the comic out by preparing a Robin memorial for Damian Wayne in the Batcave. Before they are attacked by this stealth foe, who breaks into the Bat-vault as mentioned before.

The second deals with a terrorist-hostage situation in Kahndaq. A foreign nation that has forbid any US citizens from entering. That doesn’t stop Wonder Woman and Superman from springing into action to save lives, and causing more international troubles for the Justice League!

The final, and weakest story, deals with the new Atom and Firestorm heading to the Watchtower to be confirmed as new members. Nothing of note happens there until the final page of the comic, and even then it isn’t a great or interesting cliffhanger.

The first two stories do interact near the end of the issue with Batman finally outing the Wonder Woman/Superman relationship, but it really doesn’t progress much beyond some talking.

Disjointed is the world I used, but I would also say it felt small for a Justice League comic. I know they are setting up for bigger things, but it could have used a bit larger scale. Perhaps drop some of the Firestorm/Atom interactions (Especially her introduction playing some made up video game!) 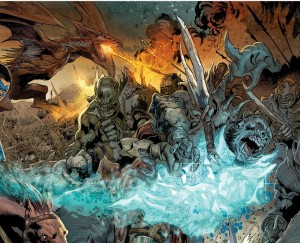 Best looking page in the comic...doesn't impact the story at all!

The art in the book though was surprisingly strong with some great facials (not sure why it’s the first thing I notice in comics) and movement. One panel in particular has Alfred breaking down to Jason, and you can see his body shaking in the image. Very powerful stuff.

While it served no purpose in the grand scheme of the story, I also liked the big fight feel of Atom’s virtual battle. Tons of characters on page, some nice color usage and a variety of character types (humans, dragons, pigs, gorillas,etc) just makes for a fun visual.

Score 4 (Out of 7)– I keep using the word disjointed and that’s what I’m going with for the recap. It feels like you are getting fed tiny bits of stories which can prove to be interesting in the grand scheme of things, but don’t really help when reading this issue. It sets up some potentially cool and potentially rehashed storylines so leaving it in the middle because a lot of how this reads will depend on future issues.