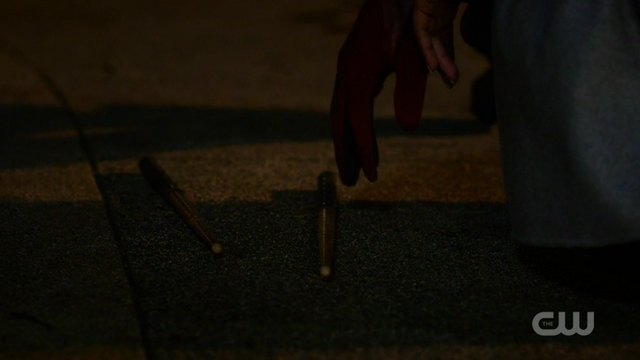 Well friends we’ve reached the proverbial end. This is my last warning but spoilers beware. So we’ve reached the Season 3 finale of The Flash. So our episode begins after Savitar kills Iris West (Candice Patton). As she lies dying in our hero’s (Grant Gustin)  arms…drumsticks fall to the ground.

Then its revealed that Iris was HR in disguise. So hours ago HR (Tom Cavanagh) was able to locate Ms. West thanks to a piece of Savitar’s armor. They made the switch-a-roo and no one was the wiser. As HR lay dying he passed on some words to the Scarlet Speedster. This was foreshadowed but still its just sad.

In the time being, our villain had a contingency plan. He seized the speed force bazooka and Vibe (Carlos Valdes). Back at his lair, he attempts to encourage Mr. Ramon into modifying the device. So plan b is apparently this. He wants the gun to multiply his essence across all of time via the speed force. Yep, nothing like legitimately god complex dreams! Vibe refuses but baddies have a way of convincing people. Rather than threaten his life, he promises to kill Killer Frost (Danielle Panabaker) if he’s unwillingly to help. So Cisco has no choice but to comply. 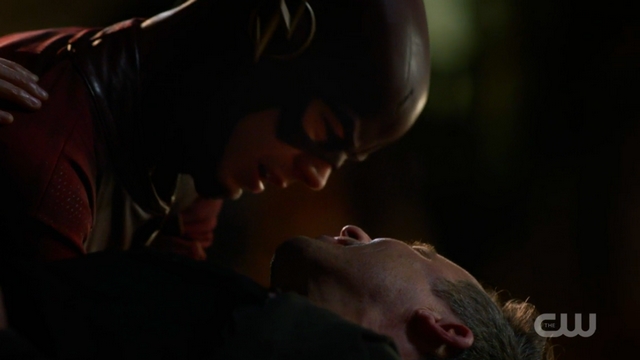 In the meantime, the team is coping with the fact HR sacrificed himself. Main realization is that time is changing. This is proven where the future article is written by Iris again. During that time Savitar also gains the knowledge knowing that he didn’t kill Iris. So, now this is where things get um…interesting. He now doesn’t exist whatsoever. So the time paradox will eventually reach him.

Barry somehow knows that it’ll take a matter of hours for that to happen. Interesting considering it was never mentioned before the season finale. Nor really explained either. Details, details I suppose. More importantly, later on Barry and Iris have a conversation in the time vault.

As BA stares at Reverse Flash’s suit(yes they still have it!), he reflects on his past battles. He notes that he fought with rage against Thawne and Zoloman. However he  knows that may not  be the best course of action here. So he decides to meet his evil self and offer help. That’s right no plan aside from extending a hand. Savitar finds this hard to believe but as they share memories he knows there’s no trap. 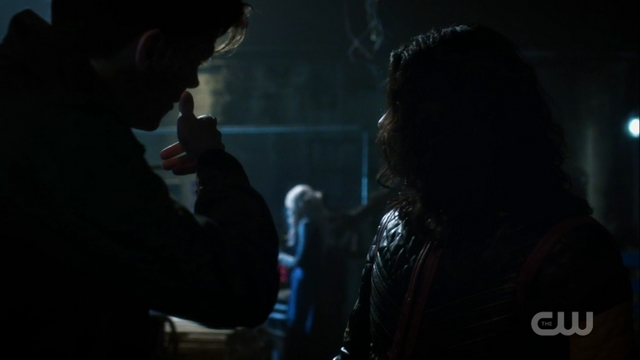 He returns to Star Labs with his evil self. The team is um less than happy to see him. Everyone is understandably on edge, see as the guy spent a season trying to hurt them all. Tracy Brand (Anne Dudek) openly objects to the whole idea of helping the season 3 baddie. He robbed her of a future with the man she loved. So its fitting that his future is one where he doesn’t exist.

Iris however approaches him and sincerely asks that he trusts them. I agree with Savitar as he finds her faith amazing. So they stroll around the lab making some small talk. Then the real questions start. Where will he live and where will he go? If they do help where can he stay? Of course they have no answers but urge him to stay nonetheless. Not sure how much goodwill will work with this guy. 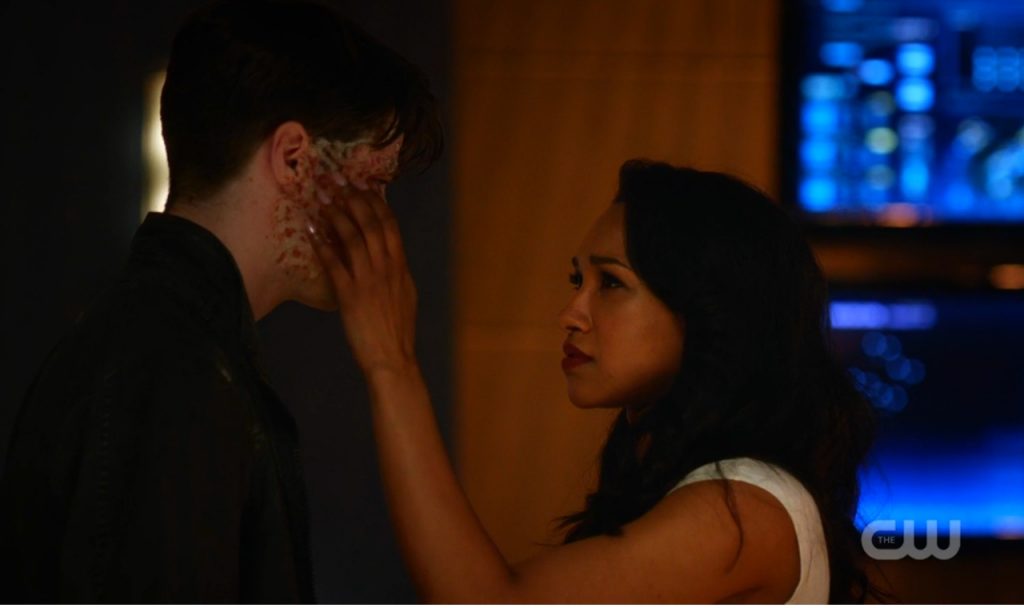 However all of this was a means to kill time. The Philosopher’s Stone went off like a bomb but Wally and Barry were able to save everyone. Savitar had this planned out to buy Cisco time to modify the speed force bazooka. Before meeting an untimely end at the hands of said villains, Gypsy makes a surprise cameo to save Vibe. Soon after the team readies themselves for the finally battle.

Now back to Savitar’s plan b and why he needs Killer Frost. The two are in the middle of creepy forest with the speed force bazooka. He proceeds to open a portal . He makes note speedsters aren’t supposed to mess with time. Well I’m glad someone on this show remembers the rules. Afterwards a zombiefied Zoom, known as the Black Flash appears. As he nearly reaches Savitar he’s killed by Killer Frost. His only weakness, being a speedster is cold, which is why he needed her. 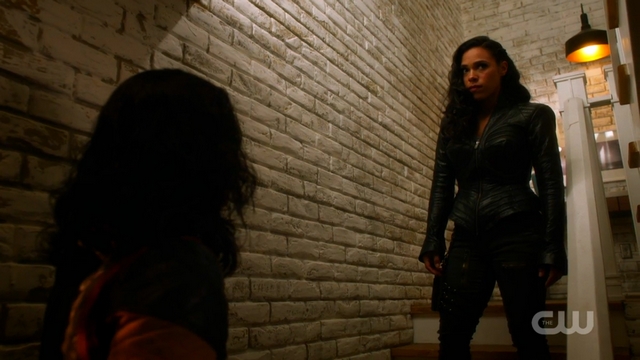 Then they activate the device to enact his plan to avoid nonexistence. But it blows up in his face. As the team is warped to the location, his plan begins to fall apart. The weapon instead pulls Jay Garrick (John Wesley Shipp) from the speed force prison and its go time. Kid Flash (Keiynan Lonsdale), Garrick, and the scarlet speedster do battle with the evil Barry. He proceeds to outclass them. Meanwhile Vibe does battle with Killer Frost and he gains the upper hand. Rather than take her life, he offers her the antidote to her life as a metahuman.

Thanks to help from a seemingly reformed Caitlin, Barry gains an upper hand on Savitar. There’s a point in the fight where Barry is moments away from killing him. Being the hero that he his, he can’t back track on his morals.At the time he was in the Savitar suit in which he skillfully obtained. He spares the poor man his life. Now if you’ve watched previous Flash seasons, that’s never a good idea. In a last second attempt Savitar bolts to kill Barry behind his back. However he’s stopped by a well aimed bullet via Iris. So yes, she shot the love of her life to save himself from himself. Yep, season 3 folks. 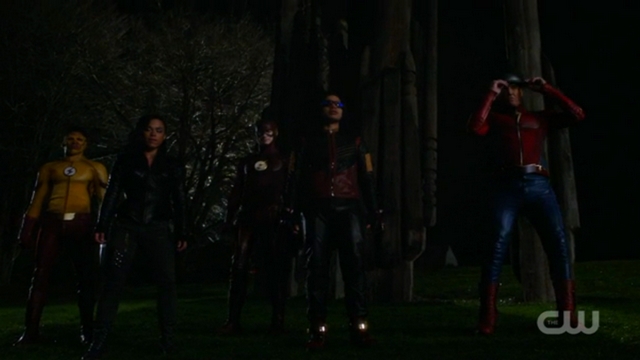 Afterwards, we see the evil speedster fade away into nothingness. Thanks time paradox!

As the dust settles, we are then witness to HR’s funeral. Its a lovely and  very sad ceremony. He was a special Wells and I believe one that connected with people unlike any. As Barry passes on his last message to Cisco I felt as if I was sucker punched. Everyone says there good byes as we move on to our last few minutes. So Barry and Iris realize they survived it all and have the future in control. After delivering the wedding invites, things gets bad.

So a massive energy storm causing earthquakes and massive damage is raging. It deals a massive blow to Star Labs and the team scrambles to find out what it is. Well there’s out its the speedforce itself tearing apart. You’ll remember that the speedforce for all this time had a prisoner. However Jay was ripped out of it with the bazooka. Thus, it can’t hold itself together. A speedster has to being imprisoned to keep it stable. Barry realizes that is his task. 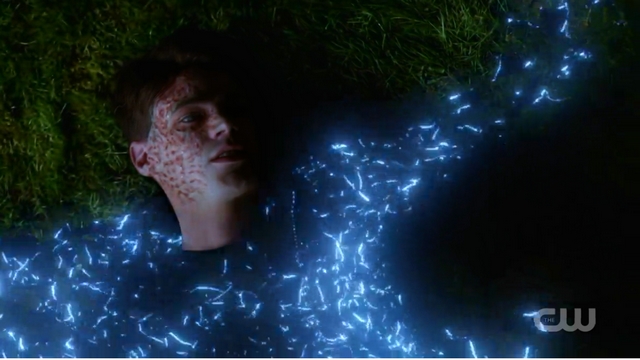 Before he can argue the issue, the omnipotent and sometimes more than just science, speedforce appears before the team. In the form of Barry’s mom, she summons him to return to the speedforce. As he says his goodbyes he reaffirms other matters we saw foreshadowed earlier in the season. One, he would have to pay a price for his damage with FlashPoint. The other, is helping Wallace take over the mantle as Central City’s Flash.

Before leaving he share a very emotional goodbye with Iris. He asks her to never stop living and to keep running. Thus our Scarlet Speedster makes his way to the speedforce to serve his sentence. 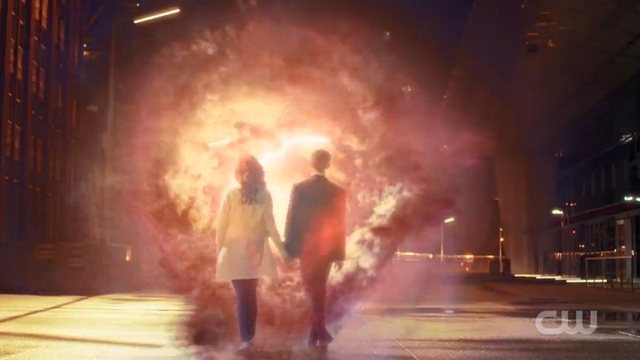 The season finale of the Flash was pretty good. A lot of the finale however seemed to suffer from the same problems season 3 has dealt with. Now there were a few fun moments and scenes that elevated it.

The season finale of season 3 was mostly solid. There were a few bumps in the road. But Grant Gustin playing as an evil twin is still some very solid acting. The conclusion to it all was satisfying as well.