From Fandom with Love: Thunderball

Thunderball is an interesting film in the franchise. Depending on what you want out of your Bond films, it can really go either way. It has never been on the bottom of my list of Bond films, but generally the long and tedious underwater sequences are usually the things that stick in my mind which tends to sour my impression of the film. I mentioned at the end of the Goldfinger article that it marked the end of my love period with the Bond films, but I may extend it just a bit.

After re-watching Thunderball for this marathon, I find there’s a lot more to love in this film. Yes, the underwater sequences still bring down the overall quality of the film, but the rest of the film goes back to Bond being a cop/spy. He spends a good deal of the movie chasing down one lead or another, and it’s always interesting to see. It also helps that this is the first time that he is clearly on a deadline. While other films obviously had a end-point, this is the first time that Bond and company are given a specific time so it’s Bond against the clock before everything goes down. 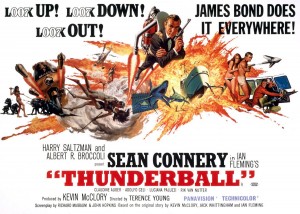 Anyhow, Thunderball marks the 4th time that Sean Connery would take up the mantle of agent 007. After a brief reprisal in Goldfinger, SPECTRE is back as the central threat to the film, and we’re moving on up as Bond crosses paths with Number 2, Emilio Largo. Let’s get to it! 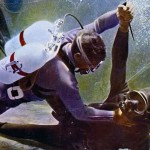 For once, I shall take the easy road and just steal the Wiki summary:

The film follows Bond’s mission to find two NATO atomic bombs stolen by SPECTRE, which holds the world ransom for £100 million in diamonds, in exchange for not destroying an unspecified major city in either England or the United States (later revealed to be Miami). The search leads Bond to the Bahamas, where he encounters Emilio Largo, the card-playing, eye-patch wearing SPECTRE Number Two. Backed by CIA agent Felix Leiter and Largo’s mistress, Domino, Bond’s search culminates in an underwater battle with Largo’s henchmen.

The film’s structure is interesting since it actually deals with Bond falling into evidence at the start of the film while on vacation. This information comes in handy when MI6 announces Operation Thunderball as Bond notices several of the parties in the docket. This is what leads him to Nassau, where the film turns into more of a spy drama as Bond looks for evidence and proof under the threat’s deadline.

Speaking of the villain’s grand scheme, Largo has a fairly well-thought out and even executed plan. Say what you will about SPECTRE, but they are a pretty well-organized and respectable evil organization.

Largo’s plan involves the theft of two atomic bombs from a NATO plane. With the bomb in their possession, they plan on blackmailing the US and European government into paying them a lot of money (in diamonds) to not detonate the bomb in a major city. To prove their powers, they force Big Ben to go off one extra time. Largo’s plan works pretty much up until the deadline when Bond was finally able to discover the location of their missiles and thwart the scheme.

The reasons this plan gets a 007 status are numerous. First off, the villain actually succeeds. Largo is able to hijack the planes and the bombs attached to them. Largo is able to blackmail the countries involved, and was hours away from getting his payment. The only reason it ultimately fail is that Bond is able to discover the locations of the bombs before they are able to board them on hisÂ yacht. Secondly, there was an end-game and a logic one at that. SPECTRE would obtain their money and keep possession of the bombs. There’s no property damage involved, and people would come to know they were a respectable evil organization. Finally, the plan actually has very few loose ends. Most of the leads Bond chases down are due to luck not leaks from any of Largo’s men. 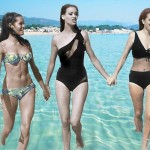 Patricia Fearing– Bond starts off the movie on vacation, which means he attempts to get some play. While I’m a fan of the Bond character, I can admit when he crosses a line. He forces himself upon this women the first time they interact, and she has to repel his advances. Later on, he blackmails her into sleeping with him.Â RememberÂ this is our HERO, and not even a woman who is actually that important to forwarding the plot/gain information so he is just doing this for his own benefit. And just to show how great a guy Bond is, he leaves her with the promise of calling/writing, we never hear from her again. LIVE (but damaged)

Fiona Volpe– The Bond writers started playing with the tropes of the franchise as early as the 4th movie. Fiona is a member of SPECTRE who Bond is able to woo and eventually sleep with. Unlike Tatiana and Pussy Galore before her though, Fiona doesn’t fall for Bond, betraying her mission and her boss in the process. Instead, she gives a very cutting promo to Bond about how she used him as much as he used her. Bond tries his best to retort by saying he took no enjoyment in it, just did it for queen and country.

Aside from not being charmed by Bond, she is also the first Bond girl, who can debatable be said dies as a result of Bond’s actions. Sure, he doesn’t shoot her, but he does put her in the way of a bullet. If he knew or not, is another debate. And to add icing to the cake, he makes another Bond pun after she is murdered. DEAD

Paula Caplan– She has a very minor role in this movie, introduced as Bond’s local contact in Nassau. She helps out for a bit before being captured by Largo’s men and eventually committing suicide so that she wouldn’t reveal any confidential information. DEAD 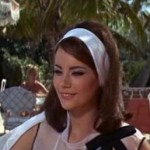 Domino Derval– The “main” Bond girl of the film is the sister of one of the man who helps Largo obtain the atomic bombs… before he is disposed of by Largo himself. She is introduced as Largo’s “niece” but serves more as his mistress. For the most part, she has a pretty unassuming role throughout most of the movie. Other than a larger battle between Bond and Largo that also crosses over to her love. She gets some interesting development (and motivations for a Bond girl, a first), but it is quickly introduced and done away with in the span of about 2-3 scenes. She is seen whisked away with Bond at the end of the film. Interestingly enough, she becomes the first major Bond girl that Bond doesn’t bed (at least not to my memory). LIVE

This movie is just oozing from Bond-isms. The dude is just entering super-douche mode in this movie including his confrontations with several members of SPECTRE. Ultimately though, only one of them could win and I’m gonna pick a little moment that really serves no purpose other than Bond taunting his defeated opponent.

Bond is exiting the room since the man’s security is about to break into the room, and he takes the time out to throw a bouquets of roses on his opponent. What purpose this it serve? Why do it while being pursued? Because he’s James frigging Bond!

After saying, I would make some modifications to this portion of the article because Bond actually doesn’t play cards that often.. he engages in a card game with the enemy in this movie. Sadly enough, he is playing baccarat again, which is the card game we detailed during Dr. No! So check out our Dr. No article for more information!

First thing first, Sean Connery finally makes his debut in the gun barrel sequence. The first 3 movies had a stunt double in the role of Bond. Second, there’s not much to say about cold open of the film. Already mentioned the best Bond-ism from it. The opening sequence is also famous for Bond’s use of a jetpack, which was pretty cool, but about it.

The Thunderball intro becomes a lot more visually enticing and grand than Connery’s previous three films. Where From Russia with Love and Goldfinger took a single idea from the film and ran with it, Thunderball focuses on the place where the movie takes place.. namely a lot of water.

The motif is a lot of underwater action with girls swimming about with their hair-flowing. It also borrows from the film’s climax’s main mean of attack the harpoon gun, which gets a lot of love during the opening. The opening also makes some interesting use of colors. Mostly focused on blue since they are underwater, but some scenes with a very bright red. I’m probably stretching, but probably to symbolize the sharks in the water since that’s a big part of the movie.

Now the song.. well I’ll be honest is one of my least favorite in the franchise. It doesn’t make much sense lyrically “He always runs while others walks” always seems like the opposite of Bond to me, he should be the guy cool under pressure. Not the guy frantically rushing from point A to point B. And I may be a bit bias, but I think it’s hard for a male vocal to really work in the Bond-verse. Not to say it doesn’t or can’t (you’ll see much later on), but it’s just really difficult.

It also helps that the alternate theme song was much better, but this was back when the Bond creators preferred to have the title of the movie in the song (Which also kind of ruins the main theme for me).

This viewing of Thunderball has really helped lift the movie’s status in my book, though my initials problems still remain. The underwater sequences just go on far too long to be interesting. It doesn’t help that underwater battles are a tough sell to begin with since everyone has to move at half-speed just due to the nature of theÂ environment. Second, and this is more of a new criticism, but even with 4 different women none of them are really ever that fleshed out. Sure that is a criticism that could be slapped around most Bond films, but at least they only do it to 2-3 girls. This movie did it to 4 different ones. And lastly, and VERY much the most recent one, the film so far has the grainest transfer of the Bond blu-rays I own.