We’ve done origins in a connected universe, and now we’re working through standalone affairs. One of the best versions of Batman’s origins is Frank Miller’s Batman: Year One, in 2011, the series was adapted into a DC Universe Original Film with a pretty stellar cast including Bryan Cranston as James Gordon, and Gotham’s Gordon, Ben McKenzie, as Bruce Wayne/Batman.

The story recounts the beginning of Bruce Wayne’s career as Batman and Jim Gordon’s with the Gotham City Police Department. Bruce Wayne returns home to Gotham City at the age of twenty-five from training abroad in martial arts, manhunting, and science for the past 12 years, and James Gordon moves to Gotham with his wife, Barbara, after a transfer from Chicago. Both are swiftly acquainted with the corruption and violence of Gotham City, with Gordon witnessing his partner Detective Arnold John Flass assaulting a teen for fun.

I haven’t seen nor read Batman: Year One in several years so it was kind of refreshing experience checking it out again. This movie is just filled with so many iconic moments for Batman and James Gordon. While a lot of it was made famous during Christopher Nolan’s Batman Begins, they all came from here.

While the movie is titled, Batman Year One, the film focuses more on Detective James Gordon than it does on Bruce Wayne/Batman’s journey. It does offer an interesting contrast though between someone trying to do good within a corrupt system and a force from the outside making all the difference. 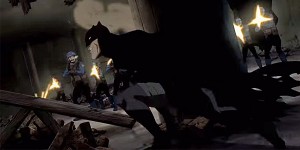 The movie attempts to stay too faithful to the source material, and it works and doesn’t work. The two biggest issues seems to be the inclusion of Catwoman which doesn’t really have much of a role in this film. Especially since it toned down her comic book arc, which I’m all the more than thankful for. The other is the internal monologues which the book was heavy on. At times it works, but it’s also strange to hear your characters’ thoughts instead of them verbalizing it at times.

The good though is it makes for a really nice-paced adventure that covers the span of a year pretty well. There are some cool action set-pieces including Gordon’s revengeance and the GCPD vs The Batman. The voice work is pretty solid, and the music is a pleasure to your ears.

Like I said before, this adaption is filled with memorable and iconic moments, but I think the one that stands above the rest is Batman introducing himself to the elite of Gotham.

You’ll get more mileage out of the comic, but this is one of DC’s better adaptions.

Next on The DC Animated Chronicles: Wonder Woman DTV