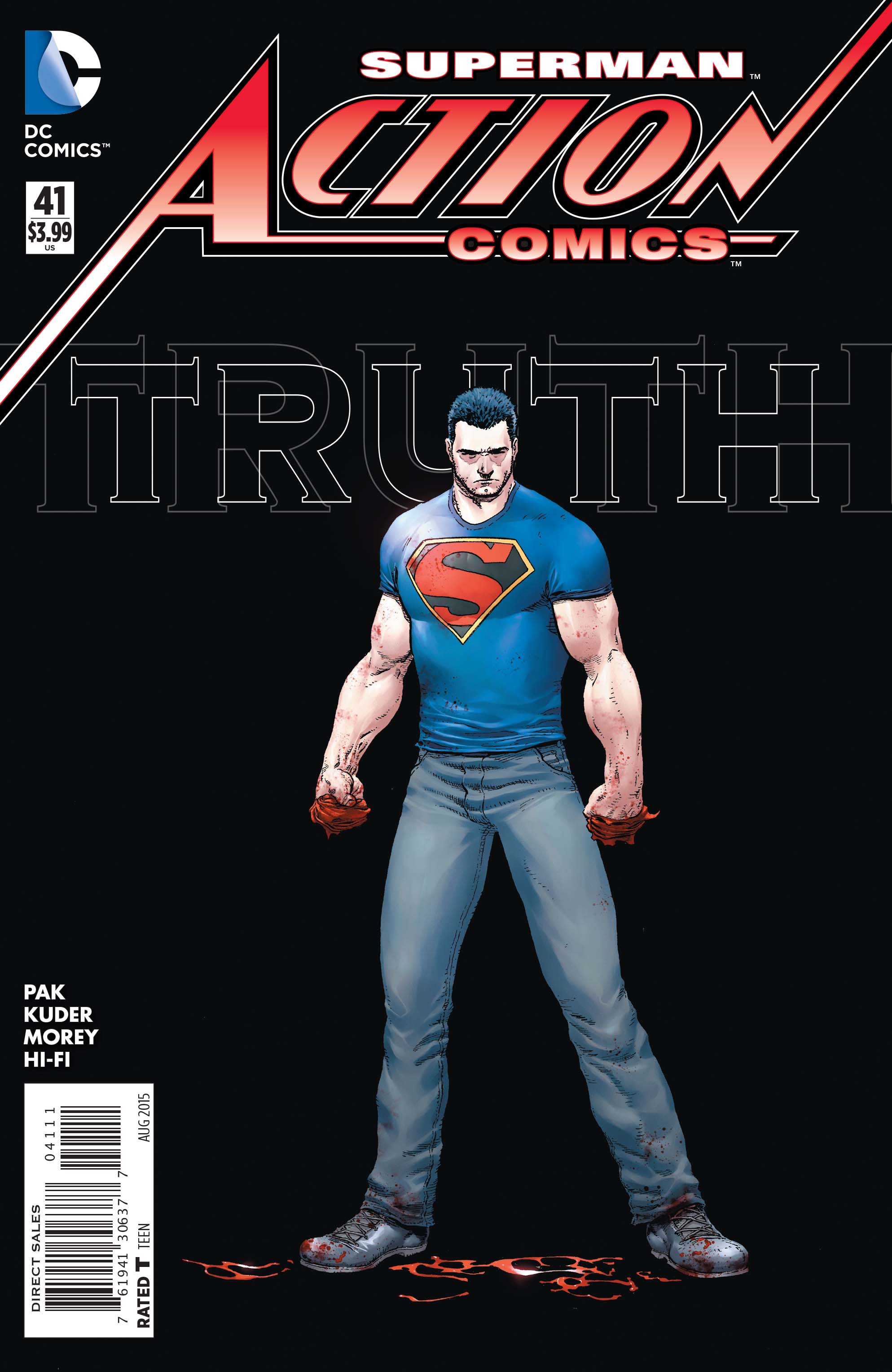 This is comic is good. Buy it. The End.

Okay, okay, just kidding. But seriously, this is not a run of the mill Superman comic, a fact which is totally obvious right from the front cover. It features Superman standing (not FLYING… just STADNING) in a grim, black background with blood spattered at his feet and the word TRUTH hovering forebodingly behind him. He’s not in his iconic suit, but an ordinary pair of blue jeans and a blue superman tee shirt, contrasting the blood-red strips of cloth wrapped around the knuckles of his clenched fists. His stance is spread-legged, broad-chested, head bowed slightly, like a boxer staring his opponent down from across the ring. It says “I’m ready. Come get some.” There’s an air of grit and defiance and down-to-Earthness rarely seen on the big, blue Boy Scout. With his bloody-brawler look and short cropped hair he looks more like Frank Castle than Clark Kent, yet the tone manages not to cross into “this is not Superman” territory. Full marks! And it perfectly sets up the story that’s about to unfold.

Superman has lost his powers (mostly), his secret identity has been exposed (about time…), and he’s a long, long way from home. He is, effectively, no longer a super hero, or at least not nearly the one he used to be. Which begs the question: What do I do now? His solution: go home – go back to Metropolis and decide his next move. I don’t want to say too much more because I want you to read it. There’s plenty of action, and the action is “grittier” than your average Superman comic (reinforced by the overall blue-grey color scheme) but still it is by no means grim. The story is infused with all the warmth, sentimentality and All-American manliness we expect from Superman, and this is definitely a good thing. It feels like an update without sacrificing what makes Superman Superman. Besides, let’s be real here, things have gotten a little too dark lately. Superman says “I’m down, but I’m never out, and desperate times do not call for desperate measures. No matter how bad things get, we can get though it with our souls intact.” We need a little more of that these days. This feels like exactly the right step forward for the boy in blue. Oh, and by the way, there is nothing cooler or more American than the Man of Steel riding cross-country on a Harley Davidson. If that doesn’t sell you I don’t know what will.

Oh yeah, and the art work… it’s pretty. But honestly, what did you expect? It’s a SUPERMAN comic, of COURSE the art’s gonna be pretty. You think they’d let some hack work on Superman?… Oh shut your cynical mouth, Internet! Jeez… anyway. #41 is a real promising start. I like this rough-around-the-edges Superman (he says “Hell yeah.” I like it when he says “Hell yeah.”). I’m really interested to see if this take on his character sticks. It’s hard to escape the posh-yet-folksy, almost presidential aura of Classic Superman and I’m not sure we ever will. It’s too ingrained. Will he simply become more and more the way he used to be as his powers inevitably return, or will he retain some of this hardened, street-wise demeanor into the future? Will he ever return to his former power level, for that matter? And what about this “truth” that was hinted at in the cover? What could it be? Only time will tell.

P.S. If that score seems low given how much I’ve hyped this thing, it’s because I want to leave room for it to grow. Stop questioning me!