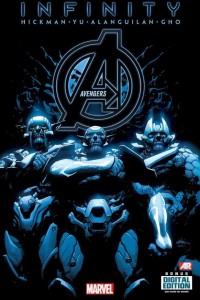 First a disclaimer: I am not the biggest fan of Yu’s work. However, I’ve found that usually the first issue of an arc he does for a comic tends to be the best. What I will say was that his pencils did not profoundly detract from my enjoyment of the issue. Â While I had a few issues here and there, I will say that this issue of Avengers was one of the first I have truly enjoyed in a while. I also appreciate that Marvel is acknowledging that books written by the same writer as their event are more than just tie-ins: they are pretty integral to the story.

In my review of Infinity last week, I was concerned because I felt that much of Hickman’s Avengers run had been heavy on plot and concepts and light when it came to being grounded in the point of view of characters. I went on to say that I had felt that the characters he had focused on were, in my opinion, boring and hard to relate to. And while in this issue, we don’t focus much on characters like Cannonball, Sunspot and Spider-Woman (though she got this weeks Assemble for her point of view) we do get pretty good look at the larger scale of this cosmic conflict from perennial villains: Skrulls. Hickman continues with the the current characterization of a war focused race and obvious still reeling from the various things that have happened to them over the years. We get Super-Skrull as our point of view, which is nice as we see the Galactic Council prepare for war. The Avengers are in a unique position as regulated to soldiers from one of thousands of worlds preparing for battle. And we see the battle and the trap that the Builders set. This does leave the Avengers seemingly spit into two groups, which I find concerning since this issue already has a huge cast and Infinity will be split between Earth and space. (Also, I really hope they gave Falcon a really great space-suit, otherwise that seemed mean just leaving him out there)

Yu’s art is ok. I do think that Alanguilan and Gho did a great job on helping what often turns into very muddy, dark and sketchy look. I do think the last page could have been clearer on what happened, but with Yu, I’m just happy I could mostly tell whoever everyone was and what they were doing. 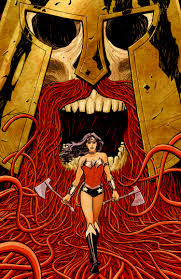 Another great issue, and another great end to what I consider the 2nd large arc of Wonder Woman. While I would have liked the First Born to have more than 1 issue of rule in London, I do think this was a great ending to the First Born arc. We have enemies becoming friends, a newly resolved Orion taking over for Lennox as the ‘alpha male’ Â of the group, and War sacrificing himself. We also see Diana try to win by using her newly found Olympian-charge and failing against another child of Zeus. Â We see her then truly falling into War’s footsteps and making a sacrifice that certainly will mark her character for a long time. And it seems to set her on a journey as the new Goddess of War and what I hope is Apollo’s grand plan via his saving of the First Born.

I know many people are torn about Azz/Chiang’s Wonder Woman, and while I understand many of those issue have validity, I truly have enjoyed their run. And while I wouldn’t say it exists outside the New 52, I think that this a a very stand alone story that takes a very different take that has never been done before, really in comics. They see the horror of the Greek Gods lore and have applied it a genius way. While intense, different and changes Wonder Woman lore in many ways, and also certainly a PG-13 Wonder Woman comic, it is one of the best books out there. 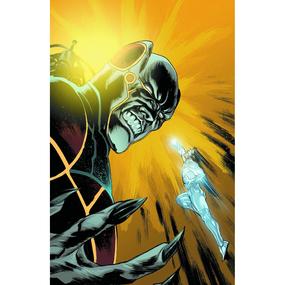 Another fantastic issue by the team of Jordan and Walker. I get a sense that the new Lantern writers are on the same page on leading up to Lights Out. Here we get a peak into Relic’s motivation, and it’s nice to see something other than wanting to rule by fear or rage, or killing everything. Relic seems to be more complex than that, which is great. We also get a huge change for a Lantern corps, something already rumored to happened, which makes one think what might happen in Lights Out. It’s also nice to see Kyle and the Templar Guardians start to gather the group of Lanterns from other Corps in a way that makes sense and lends urgency to the book and the coming event.

Not only has Jordan nailed Kyle and Carol, but he continues with Saint Walker and the Blue Lanterns. Walker is still doing great with art, bringing a unique style that really gives this book a uniqueness that helps it stand apart from other Lantern books and also brings to life the cosmic landscapes of the DCU.