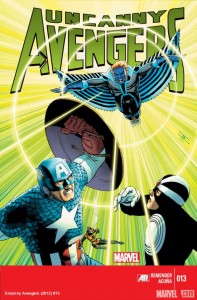 Great to see Acuna back for this issue. Last month’s fill was very off-putting, so it’s great him back. This issue was solid, with nice bonding between Havok, Wasp and Cap, and to see Havok leading due to Cap’s understandable injury. It was also nice to check in on Wanda & Simon’s love for each other as well as Wanda being a hero again and hatching a sensible plan. The stand out for me is to see Wolverine’s actions for the last few years come back to haunt him and sets up Year 3 of this book. We also see a classic set up of heroes trying to do good but the readers knowing better, and with death promised soon in this book. 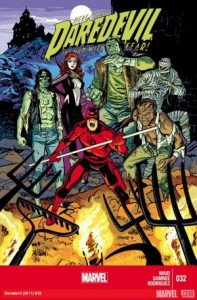 This was a solid issue that continues the Sons of Serpent plot line that Waid has been building. He brings back the Jester with a slightly modern twist (though not costume) and seems to bring in Foggy as Matt’s ‘temporary’ information guru. He also throws a welcome curve ball into the plot line that seems to mostly about race relationships and the Sons of Serpents hold over New York City’s police and judicial system. The ending is a good one, but ever since the mystery of the Bullseye plot line has been resolved, I’ve felt that Daredevil has been good but not great. I hope DD’s interaction with the League of Monsters changes that. 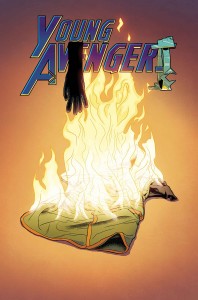 Really fantastic issue. Gillen nails it on taking what would be a classic issue/episode before the end of season and turns it on it’s head. While we get the hero captured, the world in peril and the villains teaming up we also have unexpected changes – Noh is more concerned with his appearance and is, in fact, in flirtatious contact with some of villains, Kate’s age concern turns out to be a joke, Prodigy does the smartest action of anyone of the team, and Loki get some of what he wanted but not quite all and betrays his ‘friends’ trust at the same time. McKelvie, as usual, brings his A game and is backed up by his myriad of inkers.