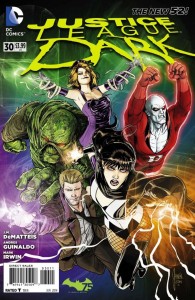 No one wants to play with John Constantine anymore. The House of Mystery, Dead Man and Nightmare Nurse, now under the lead of Zatanna search for a new path forward as the Justice League Dark. Distrust in old flames and new allies indicate it’s going to be like changing a bandage on a fresh, still-healing wound: messy. J.M. DeMatteis moves briskly past the events of Blight and Forever Evil with new artist Andres Guinaldo taking over for Mikel Janin. Resulting product is a refreshing start to a brand new team that will dive readers into the mystery behind Nightmare Nurse.

Forever Evil Blight, for all it set out to accomplish was quite enjoyable for me. Sure, the idea of the team facing off against the physical incarnation of humanity’s evil was a bit of a stretch for some but what about this book isn’t? These characters live in a world filled with magic and magical enemies. Blight fit into this world as well as villains like Faust or Nick Necro. Where Blight as a character may have failed was in its representation as a real character instead of a foil to the team. That’s primarily my take away from that story. As a team that deals with the supernatural elements of the DC universe (and with John Constantine as their leader), they do some morally questionable things from time to time. Blight brought out all their good qualities to show why they are heroes. That was one of the goals Forever Evil set out to accomplish as a universe-wide event.

Now that the event is over (at least for some titles like Justice League Dark) creators like DeMatteis are picking up the broken pieces and starting over. Whether John Constantine remains a part of this title going forward is still up in the air but DeMatteis seems to be keeping him around for now. Zatanna being the leader and current “owner” of the House of Mystery won’t get any complaints from me. I like the character but I feel like she has been a bit underutilized thus far. Hopefully DeMatteis is about to show how amazing she is now that she’s under the leader spotlight. Deadman seems to be the other consistent member of this team which makes sense and makes me happy. Being able to hop into various bodies makes him quite useful. Glad we got to see a bit more emotion from him st the opening of this book. Nightmare Nurse is still a character that is growing on me. I adore how DeMatteis writes her because she doesn’t appear to be trustworthy and I believe that’s the point. We’re now finding out just why. The remaining team members are still up in the air. Swamp Thing appears to be joining but I’ll wait it out a few issues before getting too excited.

Characters aside, the scenes and how they are depicted by Guinaldo are beautiful. I thought I was going to have a tough time staying with this book if Janin ever left but this was a smooth transition. While Guinaldo doesn’t have the same smooth simplicity as Janin, his art is impressive for completely different reasons. There is a playfulness in how he illustrates facial expressions that fits in quite well, especially in the lighter moments of the book. What surprised me the most was how much more frightening, rougher and muscular some of the characters look than when they were illustrated by Janin. I liked it, a lot. Most importantly, Guinaldo is showing flexibility. Not only can he design and illustrate a scene that fits the tone of the moment, he draws gorgeous backgrounds. Since most of this book took place in the House of Mystery, there was quite a variety in the backgrounds. A scene with Frankenstein, Deadman and Black Orchid took place in a gorgeous green, flowery valley with majestic-looking skies. Towards the end the remaining team members are discussing their futures but the conversation took place a top a cosmic background filled with star, planets and distant galaxies. Guinaldo was a wonderful choice for this book.

Unsure of what to expect from this book, I was ready to be disappointed by the shift in the creative team. That didn’t happen and I couldn’t be happier. DeMatteis and Guinaldo produced a book that reignited my excitement for the series. With Forever Evil in the past, I’m probably not the only one anxiously awaiting next month. 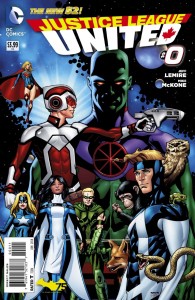 Canadians and space aliens are everywhere in this book. Jeff Lemire begins transforming Justice League of America into Justice League Canada…er Justice League United. As with Justice League Dark, the remaining team members (plus Animal Man) are searching for their way forward. Barely much time seems to have past since the close of Forever Evil before the team find themselves pulled into a plot involving aliens and possible human experimentation. Artist Mike McKone brings it all to life in a book that’s probably as fun to read as it was for Lemire to write.

As a book I had no expectations for, reading it quickly filled me the same excitement as reading Green ArrowÂ #17 for the first time. I think I didn’t have any expectations because I knew with Lemire writing, it was going to awesome. He didn’t disappoint. Firstly, this book has a completely different tone than of America. It’s much lighter and feels playful, goofy at times. Lemire added much needed humor to the title and to the DC universe. In fact, a scene with Green Arrow and Animal Man making fun of each other reminded me a lot of young Ice Man fromÂ All New X-Men.

Whoever McKone is, he’s certainly on my radar after reading this book. Lemire couldn’t have been paired with someone more perfect. His playful, smooth simplistic style fits in wonderfully with the tone of the book. There’s a harmonic rhythm to how his art dances between comedy, superhero and the science fiction genres. Both he and Andres Guinaldo on Justice League DarkÂ indicate a much needed influx of new talent at DC. My only complaint of his style isn’t even much of a complaint because it works in his favor. Backgrounds and textures are a bit overly simplistic but if they were more detailed it would ruin his style. So not much more to say about the art in this book other than it being phenomenally awesome.

Lemire immediately hits the right tone with Justice League United. It’s like the DC version ofÂ All New X-Men. As such you can expect the coming books to be a fun, exciting escapade from the snowy landscapes of Canada into the depths of space. Colorful rings not required. 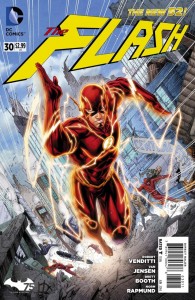 Wally West fans are going to be disappointed. I’m a Barry Allen fan to the core so I’m filled with a bit of delight knowing that many Wally West fans will likely be disappointed that the character is very, very different than they remember. Working to repair the damage caused by the Crime Syndicate, The Flash begins to unravel a mystery that takes him twenty years into the future. Robert Venditti and Van Jensen kick off an exciting run by giving readers the end of the story first.

Honestly, Venditti’s work on Green Lantern hasn’t exactly thrilled me. While I like the the scope of the story, it’s moving too slow for me. In fact, it’s moving at a Walking Dead pace. That makes me apprehensive about his tenure on The Flash. Brian Buccellato and Francis Manapul kept the stories quick and exciting. Sure it’s not fair to compare their story telling style with Venditti’s but it’s a comparison that many others are probably making too. That being said, Venditti and Jensen seem to be taking as big an approach to The Flash as Venditti is taking with Green Lantern. Immediately, we’re introduced to the story at its ending. This is what I enjoyed the most because it definitely pulled me in. No time was wasted in debuting the new 52 version of the pseudo-Flash, Wally West. It’s all interesting but I found Barry’s adjustment in the post-Forever Evil world more interesting. Venditti did a great job showing the damage that was caused to Central City and how its residents are recovering.

Brett Booth had the bigger shoes to fill because he’s taking over art duties from one of the best looking DC books since the relaunch. Not quite the simplistic, colorful work of art but still very polished. Booth draws The Flash taller and more angular (when he’s running) which looks great. My only complaints are I wish his hair didn’t look like a crew cut and that shadows didn’t look like patches of black with obvious cross-hatching. Still, his art is impressive. I’m so relieved that my favorite book got a great artist and only one artist. DC actually made some good creator decisions.

Getting myself to read this book was difficult. I was apprehensive about the direction Venditti was going as well as how opened minded I was going to let myself be. Comparing his work to his predecessors was something that was going to happen (at least for me) but I’m glad I didn’t let it affect my enjoyment. This was a good book and I’m looking forward to seeing how the rest of this story unfolds.