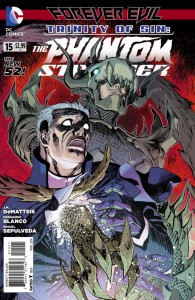 Before the battle with the Sea King, The Phantom Stranger goes off on his own to rescue Blight’s host: Christopher Esperanza. What he finds will send him back to John Constantine for help. J.M. DeMatteis continues to produce great dark stories, especially across multiple books. If you enjoyed last week’s Justice League Dark, you’ll be happy with this book.

DeMatteis does an excellent job writing The Phantom Stranger. As a character he continues to grow and evolve. While this book seemed focused on Christopher Esperanza, it was through this character that we learned new information about the Phantom Stranger. His feelings for the man he originally betrayed seem to be one of the driving forces of his defiance to The Divine Presence. In attempting to save Christopher instead of joining Blight, he’s basically damning himself to death or to forever walk the Earth as The Phantom Stranger. While he may not have the powers of Superman or presence of Batman, sacrificing himself for the sake of others makes him a hero.

I sure hope people are reading this book. It’s certainly a high priority on my pulllist because I know DeMatteis won’t fail to entertain. Characters, story and art were all very solid. Don’t know what it is about the art but it looked exceptionally great in this book. It fit the overall tone of the book and had a pleasing simplistic aesthetic. Anyone following Forever Evil should definitely pick this up because there are a couple moments that hint at what can be expected in the final issues. 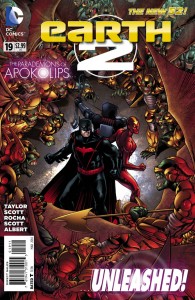 Tom Taylor can’t be stopped! Halfway through his first arc and the world of Earth 2 is in chaos. Characters we’ve come to know since the beginning are either missing, incapacitated or dead. Is it a coincidence that all this occurs after Batman’s return from the dead? Taylor’s reign upon the world of Earth 2 continues with the same ferocity, thrill and excitement as his first issue.

Only three issues in and Taylor has been doing an amazing job keeping readers guessing about what’s going to happen next. The team that opened this arc isn’t even driving the story anymore! Instead, Batman, Superman, Aqua Woman and Red Tornado are behind the wheel. This is a good thing! How often do we get a book that changes the main cast this often and stays exciting?

Among the several new things that happened in this book, the reveal of the “Top Secret” alien was quite a moment. While reading through it, you think you know who it’s going to be but then Taylor goes in another direction. Completely fooled me. Aqua Woman has an exceptionally thrilling moment on the way to rescuing this alien. I really, really hope she sticks around! This was all some great stuff but with two teases at the end of the book, it looks like Taylor is done introducing new characters…for now. A character that has been MIA for a while made her return and another is on his way.

I can’t help give this book enough praise. Free from the creative ties of the Earth Prime books, Taylor is taking this story into some great territory. Batman’s origin is coming up next in Earth 2 Annual #2 and Superman’s plan will be revealed in Earth 2 #20. As thrilling and exciting as this story has been so far, I’m eagerly awaiting to see what Taylor has in store for us when he wraps his first major arc. If it’s anything like Injustice, I’m sure he won’t fail to deliver. 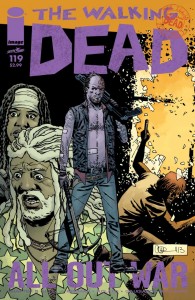 For Rick, staying on top doesn’t last long. His gains by making the first move look to be for naught. After encountering strong resistance at one of Negan’s outpost, doubt about continuing to fight is spreading throughout Rick’s army. All Out War continues as Robert Kirkman hits Rick where it hurts, his home.

As the story transitions into it’s next act, there were mostly slower dialogue heavy scenes throughout this book. Honestly, the real exciting stuff happens at the end. But, moments like this are sometimes necessary so I’ll take what’s given. Ezekiel’s loss at one of the outpost cut through his usual display of confidence. He opens up to Michonne and shows a lot of vulnerability. Michonne quickly deals with this but I thought this was a great moment. Kirkman doesn’t seem to be at a shortage for great characters. Now that the story is set to shift locations and dramatically up the stakes, it’s probably time for everyone to clench their butts. The ending of this book really has me excited about what’s coming next because we’re finally seeing what Negan is really capable of.

With an expedited release schedule for this event, we won’t have to wait long for the next issue. The Walking Dead #121 will be out in two weeks. Hopefully Rick has a plan for dealing with his surprise visitor. Otherwise this could be the beginning of a string of awful, terrible things about to happen.