The A-Z of Geek Cinema: J is for Josie And The Pussycats 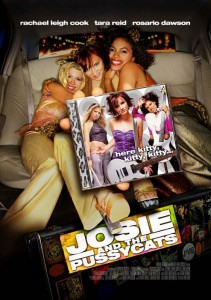 Very clever commentary on product placement indoctrinating the young, or blatant use of product placement to indoctrinate the young? It’s hard to tell with this film. Josie And The PussycatsÂ was a film I enjoyed immensely when I first saw it in theatres, comparing it to a live-action SimpsonsÂ episode. Its gags hit fast and in high quantity, so by the time you’re laughing at one, another five have passed you by. In fact, there is an entire SimpsonsÂ episode that has a similar plot to the movie, “New Kids on The Blecch”. But while there are similarities, and the feel of the whole film could be considered “Simpsonsesque”, the charms of this fun little romp go beyond just some cute commentary on the pop music industry.

Rachael Leigh Cook, Rosario Dawson, and Tara Reid play the titular Pussycats, a struggling pop-rock band resigned to playing bowling alleys and street corners for the near future, though they feel destined for greater. Through a series of shenanigans and goings on, they’re discovered and signed to MegaRecords as the replacement for Du Jour, the recently airplane-crashed hit making boy band. Little do they know that they’re being groomed not for the spotlight in their own right, but as a tool to subliminally sell products and encourage youth enrollment in the Army (yvaN ehT nioJ). Things happen, there are more shenanigans and so forth, love triumphs, the Pussycats get megapopular on their own merit, and a rollicking good time is had by all.

The issue a lot of people have with the film is that it revels in pointing out the blatant and crass product placement and marketingization of music and other forms of popular entertainment while also participating in such. To be fair, even such anti-corporate films as Fight ClubÂ had to use product placement (though that film’s was used in a very subversive fashion), but the level to which J&tPÂ goes in both its demonization and its complicity in it is kind of unreal. The entire plot hinges on subliminal marketing, and almost every frame of the film has some corporate product or logo in it. The filmmakers want to have their anarchist cake and also make money from the fact that it’s a Sara Lee cake. The level to which you can accept this dichotomy will undoubtedly tell you how much you can enjoy this film.

In any event, the movie is almost harmless. It’s fluffy and goofy, the songs are catchy (written by a cadre of big name professional songwriters), the cast is pretty great, and two of the three leads are very attractive (and also there’s Tara Reid). You’ll have a good time with it.