Welcome to #MarvelMarch! This will be a much quieter affair than our usual themed months because mostly covering older properties. We’ve done a decent job of talking about DC’s Animated Movies with reviews of the latest ones and Top 7 lists and the sort, but haven’t touched the Marvel ones at all. We look to remedy that this month by going through all of their released animated projects, giving some thoughts on them and perhaps 151 Proof Movies!

With that said, here today to kick it off with the movie that started it all, the 2006 Ultimate Avengers DTV. Let’s get to it! 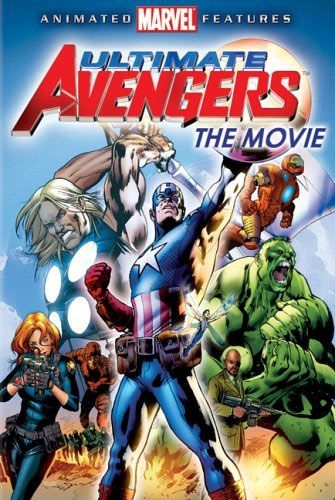 1. The Plot – A bit of a mess, the thrust of this adventure is to get the team together so its less concerned with the intricate details of the enemies plot and more concerned with throwing a threat large enough at them that they must work together to overcome it.

The plot as it stands, is there is a remains of an alien civilization on Earth who have remained quite quiet and hidden for about 60 years, and are now primed to attack. They steal some SHIELD information, and I really don’t know their plan beyond that.

2. Characters – This was a tough one to crack, in the 8 years since it has come out, Marvel has put new stamps on almost every character featured in here in the mainstream. It’s weird seeing an Iron Man who isn’t modeled to look and sound like Robert Downey Jr, it’s weird to see a Bruce Banner who is looking to control The Hulk and not run from it, and the list goes on. That said, I enjoyed the roster in this film and they all were pretty nice versions of the character on display. Memory is fuzzy but also know they toned down the interpretation of a lot of these characters from the source material, which was a godsend!

3. Voice-Acting – This goes with the point above, I’m just use to the characters all sounding different now. Most notably, though work in the films favor, its been a long time since The Black Widow has had a Russian accent, and a thick one at that. The rest of the cast were fine, but I felt they lacked character in their voices. It was mostly just people… I don’t want to say reading lines because that sounds disrespectful, but I couldn’t pick out a line from them if heard it independent of this film.

4. Design – The costumes are pretty much in-line with the Ultimate universe at the time, and for the most part how the characters look now. The world wasn’t really that expansive to see since spent most of their time on the SHIELD base, but it all worked.

One thing, and this will pop-up with a few of the Marvel animated movies, is everything has this really weird lighting/shading effect. It makes all the characters look like have a glow around them its really strange. Distracting, but not deal-breaking.

5. Animation – This has always been my big hang-up with Marvel’s animated fare, their animation seems a bit stiff at times. And this is no exception. There are scenes where it just seems like the characters are on stationary back drops or aren’t moving naturally. It’s hard to explain in words, and most people may not even notice, but it does take me out of the movie from time to time.

6. The Hulk – Minor spoilers, but the film is also 8 years old, The Hulk turns out to be the big bad of the entire ordeal when Bruce loses control. I get that’s part of the character, but it seems like such a tired trope even back then that they would need to subdue the Hulk before anything else!

7. The Fights – Not the film’s strongest attribute, I think because they were far and few between. The best one was the opening action setpiece which saw Captain America infiltrate the alien base and jump on-board of a rocket. The finale also proved to be a good, enjoyable fight with most of the team coming together to take down the Hulk.

Review 5 (out of 7) – This is a good start to Marvel’s animated fare while it suffers from most of their common problems (stiff animation and odd voice acting) it is a solid adventure. Takes a bit to get going, but when it does it works.Â