Ghost Rider:Â SpiritÂ of Vengeance has come out to stunning reviews, currently sitting at 17% on Rotten Tomatoes at the time of this article. Of course, this is a sequel and it had to have a beginning. So we engaged in a little drunkenÂ debaucheryÂ with the original Ghost Rider film. And after watching and resting on the movie a bit, I think it was probably better keeping my streak of not seeing it alive.

But as always, let’s head to the scoreboard! 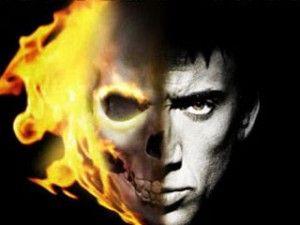 First thing I have to say about this movie is that the CG did not age well…..at all. This is one of the reasons why I have always preferred practical effects, they tend to look good forever if done right, where CG looks good the year it comes out. Secondly, Nic Cage was at his Cagiest in this. Dropping his accent for twenty minute sections of the movie, doing extremely over the top points, just being batshit Nic Cage in general here. Aside from that I have to say this movie was pretty forgettable, at about the halfway point I stopped and tried to remember what had happened in the movie and I honestly could not remember much, and I was only two beers deep at this point.Â

This was such an odd movie. I’ve seen bad superhero movies (I own Batman and Robin, way too much), and I’ve seen great superhero movies, this one isn’t really on either extreme. For example, I think the Penance Stare is perhaps one of the best things in the movie, sadly it is only used twice throughout the course of the movie. Other than that… well everything else is crap really. The CG has aged badly, but I have to question if it looked good when it came out. I mean this looks like Power Rangers The Movie level CG, and not something that was made in the latter half of the 2ks.Â

The acting.. is well Nic Cage. I couldn’t tell if it was over the top or just bad so take that as you will. But what really drove me up the wall (no pun intended!) was the romantic element of the story. It just never clicked with me. Sure romance in comic book movies tend to be ham-fisted and poorly executed, but this was just a whole different level of uselessness.Â

Our first time doing completely fan (Well, Penguin’s fans) made up rules and it worked out decently. We got most of our mileage out of one-liner rule and the “Johnny Blaze-Blaze” rules. I don’t think we every used the “Fight end abruptly rule” One thing I have to say in general about rules for movies, is that I HATE HATE HATE subjective rules! I like my rules to be definitive “This happens, you drink” not “You feel this is erotic, you drink” It leads to some people getting way more trashed than others and in the grand scheme of things that is no fun, unless you plan on drawing on that person when they pass out. Actually, when I put it that way, I can totally get behind this type of rule, just don’t have emotions or thoughts or feelings and you can dominate your friends. So take my advice and you will always win at drinking games.

Making up drinking rules is fun, but sometimes we rely heavily on genre tropes and general trailer direction in the creation process. Sometimes it works, and sometimes it falls flat on its face.Â

Opening up the rule-making process to our fans yielded some interesting results. For the most part, all of the rules were important to the movie, people said Johnny Blaze/Blaze enough times to kind of get a buzz on. I mean I would even add saying Ghost Rider or Rider to that rule, and you’d probably be set for the movie.

The abrupt fighting scene rule sounded good on paper, but I think its an impossible rule to enforce. Sometimes, a fight may end, but doesn’t mean abruptly as much as it means something story related is more important to the scene or perhaps you just think it will extend beyond it. Either way, it falls into an interesting new area for us. Not really worth it for the movie.Â

So Ghost Rider is a better drinking experience than movie (That tends to be the case with these things), but I wouldn’t NOT recommend it if given the option.