One of the reasons we tend to do all-encompassing rules often on the site is that there will always be a movie in any franchise/saga/genre that just doesn’t conform to the norm. We saw it earlier in the year when we did Air Bud, and even with a few of the Bond films we did. Sadly enough for us, Freddy’s Dead was just one of those movies that didn’t work with our Beers and Fears rule set. 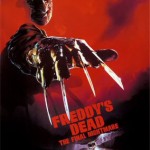 Another Friday, another memory from my childhood destroyed. As a child, this was my favorite of the Nightmare on Elm Street franchise. I would watch this one every year around Halloween and enjoy it more and more every time but upon re-watching it now it doesn’t even stand up as a slasher flick. Only three people die for Mose’s sake!

The acting is what to be expected, very sub par and forgettable, yet Robert Englund turns in a great performance as always as our unmasked killer. The plot was kind of silly, with Freddy wanting to leave Elm Street or the town Elm Street is in by getting his daughter to come back to hitch a ride on her past the border of the town or something. But what it comes down to for this movie, and all slasher movies in fact, is we want creative deaths and a high body count. This movie did have some creative deaths but their were only 3 and that can not be forgiven.

I didn’t grow up on the Nightmare on Elm St movies, I actually didn’t grow up on much horror film so I don’t really have any childhood to ruin. I had seen this movie before, as I remembered the climax, but that was about it. And I have to say that I came away entertained. Sure, it isn’t the bloodiest or goriest slasher film we have watched, and that is disappointing.Â

But Freddy was always more than just a slasher. Yes, he is a cold-blooded killer of children, but he liked to enjoy his work. Play with his food as it were. And he is on fire in this movie. Some of his more over the top, but enjoyable tortures. Including one memorable scene where he uses his victim in a video game and gets to plug the power glove at the same time.Â

Yes, at this point, Freddy is being played purely for laughs and not for actual horror sake. I don’t even remember him stalking his prey in the movie. Instead preferring to just attack them straight on.Â

The acting is about par the course for the genre at the time sans Englund who just seems to be having the time of his life in the role. The plot.. well it’s nonsensical, but whatever. I do want to give special mention to the “3D” climax which is just kind of flat when watching at home, but you get to see the obvious “This is 3D isn’t it cool!” moments and laugh!

This is without a doubt our worst drinking movie to date. Through the 85 minute run time I only started a 3rd beer, and that was only because I cheated with a boredom drinks. As I said previously only 3 people died so that was not many drinks there and the only other rule that got any use was the the killer stalking/messing with his victim.

Aside from that this movie did not apply to any of our rules, which I hope was a fluke, one-off. We will be back next week with another scaaaaaaaary movie that hopefully works much better.

This was by far the weakest drinking game we’ve ever played. For the duration of the movie, I finished 2 beers.. and that included finishing the second beer after the movie finished. In the first 20 mins of the film, there was only one drink. We started to become more lax with the rules just to encourage more drinking.Â

Can’t exactly pinpoint any one rule that didn’t work well. None of them.

Swan and I seem to disagree a bit on the general quality of the film. If you are looking for a good slasher/horror flick this isn’t the right one. But for a slasher with a bit of humor about itself, it’s worth a watch. Just don’t expect to get drunk.