There are some things we take for granted. Either because we don’t find them that important or they are never presented with a public face. One such thing is how TV series’ episodes are generally named. Due to the fact that most episodes titles never appear on screen, it is never a big deal on HOW they are name. That doesn’t mean some creative folks don’t attempt to have fun with it. Below, you will find our Top 7 Series naming conventions. There are some real gems!

I will admit to cheating for the first two though… 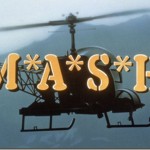 7) Pop culture References– While doing my research for this article, there were two naming conventions which are both unusual and very common among the unusual. The first was pop culturally references in the title of an episode whether it is the name of a song, a popular movie or even other TV shows. Examples of shows using this method includes: True Blood, Degrassi, Gossip Girls and M*A*S*H

6) Versus Title– The other popular way to name your TV show is by having your main character(s) take on a subject. The most recent example if of course Chuck, where every episode was Chuck Vs, but it wasn’t the only show to use this method there was The Tick in the 90s, and The Norm Show. It is a fun way to name your episodes as you get your character’s name out there while still being able to cater to the specific content of the episode.

5) The Big Bang Theory– I know this is a fairly love it or hate it type show, but credit is given where credit is due. The fact that the cast and crew have worked scientific terms into the title and still have fun with it. We get such titles as: The Grasshopper Experiment, The Panty Piata Polarization and The Creepy Candy Coating Corollary. 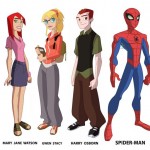 4) Spectacular Spider-man– Much like the Big Bang Theory above, Spider-man gets points for working science terminology into his titles, but the show gets bonus points for also being able to work in several themed batches of episodes. We got stuff like Survival of the Fittest, Natural Selection and Catalysts, which are all hard-science terms. Then we got Intervention, Nature vs Nurture and Identity Crisis which are all psychological terms and finally Subtext, Opening Night and Final Curtain which are all theatrical terms. It worked in a variety of naming conventions and remained true to the story of the show.

3) Bones– The last two entries applied to my love of science. This one applies to my love of a good murder mystery. While the naming convention is fairly normal (it’s sort of like adlibbing a Clue game), it is pretty unique for a TV show. The basic format is “The Noun Preposition Location” so for example: The Prince in the Plastic, The Feet on the Beach, The Boy With an Answer or The Death of the Queen Bee. Like I said fairly simple, but very different for television.

2) Community– Who wouldn’t want to take a course at Greendale Community College? The campus always seems to be popping with the most insane activities, but even if you were to ignore the things that happen to the Study group, check out some of the courses they offer: The Politics of Human Sexuality, Aerodynamics of Gender, Celebrity Pharmacology, Competitive Wine Tasting and Advanced Dungeons and Dragons. It seems like a full course load for any inspiring student. 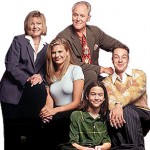 1) 3rd Rock from The Sun– A love of science, a love of murder mystery, even fun at a community college can not beat an old staple… the dick jokes. Yes, 3rd Rock from the Sun attempted to work dick into most of the show’s titles. You got a mix of really good puns, terrible jokes and really interesting word play. Here are a few examples: Ab-dick-ted, Assault With a Deadly Dick, World’s Greatest Dick, Dick on One Knee, Will Work for Dick and honestly I could quote most of the titles, but I’ll just link you to the Wiki page to save time!