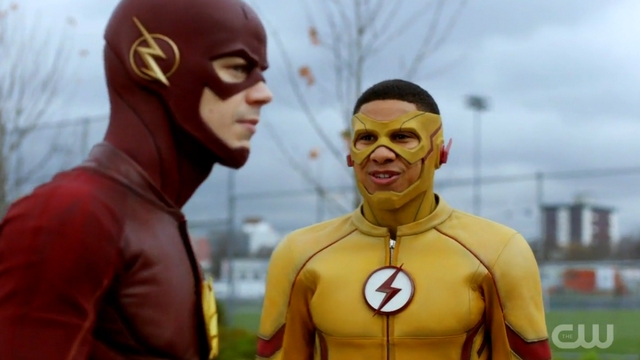 Hey if you blink you’ll miss this spoiler warning friend. So this week’s Flash episode opens up with some fun the season was foreshadowing. Who is faster? The Scarlet Speedster (Grant Gustin) or his dashing(ha) young understudy (Keiynan Lonsdale)?

This is all a test to help Kid Flash reach his top speed and not so much a race. It’s still a race. Team Flash bets on the winner and HR (Tom Cavanagh) turns out to be a gambler. Wally loses as Barry remind everyone again he is the fastest man alive. Today, had to be one of those days where that’s factual and not situational right? So we then arrive at a grim crime scene involving a decomposed body.

Turns out there maybe a new meta on the scene. Iris (Candice Patton) also freaks out when she recognizes the scene of the crime as an event surrounding her future death. This certainly has to be a bit unnerving. As you know, Joe(Jessie L Martin) got his groove back now that he’s dating Cecile (Danielle Nicolet). So he invites the family to coffee with his girlfriend and her daughter. Feels good to see dad enjoying life.

We transition to Caitlin (Danille Panabaker) and Julian (Tom Felton) are getting ready to study the dead body. However the body in less than a few hours turns to dust. Yup work of a meta human. In the mean time Cisco (Carlos Valdez), HR, and Mr. Allen are helping Wally phase. KF is doing well…for crashing into walls. So he’s not getting it and Barry tries to explain. But feeling things and going fast isn’t the best explanation. 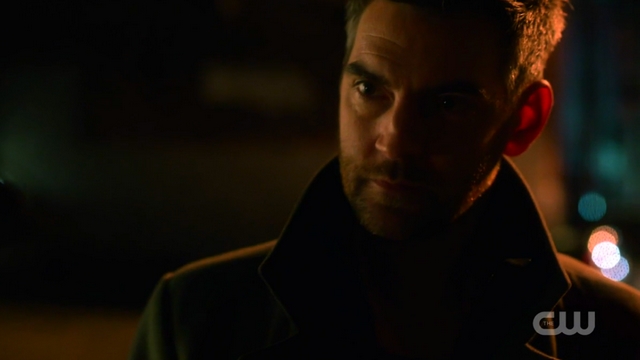 The scene then shifts to an evening scene as a familiar looking musician meets our new threat. So our new villain merely shakes the victim’s hand and ends his life. I like to point out this foe was pretty interesting compared to all the others this season. Clive Yorkin (Matthew Kevin Anderson), is a metahuman that can decay anything he touches, organic or inorganic. The following morning, CCPD’s finest look over the corpse of a new crime scene. Barry the connects that the killer maybe going after cops from Flashpoint. There’s no hard evidence however. So were off to study a fresh dead body at Star Labs!

Meanwhile,  it’s a surprise as Julian is getting on Cait’s nerves as they race to figure out the victim’s death. In doing they discover something else instead. Turns out the meta was a by product of Dr. Alchemy’s work. This clearly isn’t doing wonders for Mr. Albert’s self esteem. Why yes, you are responsible for the deaths of these people.

At Starbucks err I mean CC Jitters, the West family is chatting it up with Cecil and her daughter, Joanie. After some introductions the conversation gets uncomfortable. Turns out Joanie is a KF fan and then she asks Joe who does he like more. Oh boy, I bet he wish he had super speed to run away from that. Yorkin makes a stop by in an attempt to kill detective West. However he’s foiled by Wallace’s heroics. 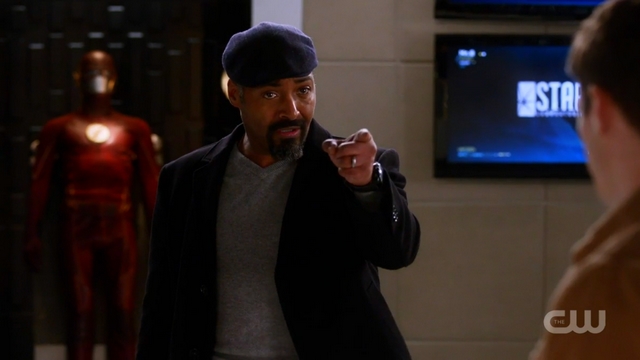 The whole experience leaves Iris distraught. She eventually opens up about her future. Needless to say, he’s not just disappointed. The scene is just so powerful.  You can see as Jessie L Martin visually slow down to take in what was revealed to him. He leaves with a huge sense that everyone had let him down. These are one of those instances where Jessie L Martin can take over the show and you forget whom else is present.

Things get worse or better? Yorkin makes his way to Barry’s and Ms. West’s loft. KF arrives to help but he just isn’t fast enough. He manages to touch her and leaves them to her eventual death. However, Team Flash is some of the best minds anywhere. They realize that cold temperatures will stop the infection and ward off her death. So Cait is scared that as she helps Iris she’ll lose control. Regardless though, her friend needs help and it’s scary.

She almost loses control if not for Julian himself. He manages to help her regain control and reminds her whom she is. It was an emotional pep talk and a scary as he trusts her enough to touch her.

Thus, Iris continues to be saved. Else where Barry and Wally talk about his shortcomings or seemingly there lack of. Barry admits that he hasn’t been the best teacher. The better the lesson the better the student right? 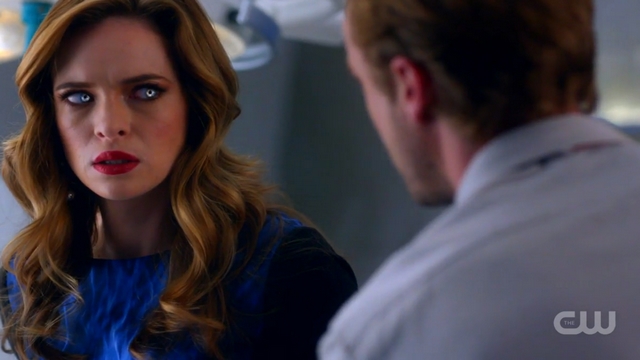 It wouldn’t be a Flash episode without the villain thinking big. To get to his last target Yorkin destroys part of a bridge. He intends to have the train crash into debris and people die in the process. Barry and Wally arrive at the scene. Barry attends to the train where KF is left to stop the criminal. One of the best comicbook moments of the season plays out for us. Barry for the first time ever, vibrates an entire train so it passes safely through the debris. Yes it was fun and fantastic.

The incredible feat inspires the young West to his present issue. Everything clicks and Wally phases through Yorkin. As accomplishes this feat he gets speedster blood into this week’s foe and neutralizes his powers. The rest of the team is able to save Iris and her near death experience reinforces some new ground rules. Everyone agrees there will be no more lying. That’s all well good but the show has gone on 3 years of telling fibs –So I won’t hold my breath on that one.

As Team Flash makes way home Julian, still hating himself, seeks work to bury himself into. Cait then asks him for a drink because he apparently isn’t all that bad. That’s nice and all but a reminder: She doesn’t have a good track record with men. So consider this a death flag for Julian!

Cut to the Speed Lab, Wallace is getting the hang of phasing himself. Then our episode ends as Jessie Quick runs in from Earth-2. Harry has been captured by Gorilla Grodd and taken to Gorilla City. 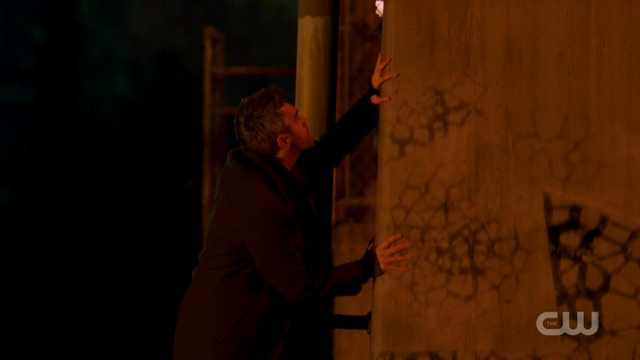 What helped this episode stay interesting were 3 factors. The first was the interesting villain. He had weight to him despite being weekly fodder. Also there’s something to be said seeing that he almost killed Iris. Not to mention he wasn’t given a code name. A methodical criminal that was dangerous.

The other bullet point was Iris’s future. You really can’t worry about the future when you can very well die right now. It helped bring thins down to Earth. You’ll always been in danger. The final bullet point was the matter of Cait and Julian. Both are dealing with “baggage” if you will. To see these two great minds deal with matters almost beyond their control is humanizing. After all, we all have things we can’t hide or avoid entirely. Ok, wait Barry phasing the whole train got me giddy like season 1 when he learned new skill after skill. That was cool!

Our episode succeeded because everyone had a good solid pace all the way through the race.