ContinuingÂ our journey though Sega’s recent super-influenced press event, we come to Captain America: Super Soldier on the Nintendo DS developed byÂ Griptonite Games, a company who is very well-versed in the Marvel universe having developed Spider-man: ShatteredÂ DimensionsÂ and Iron Man 2 for the Nintendo DS.

Unlike Thor DS, Captain America forgoes hand drawn sprite for a 3D beat-em up with an emphasis on platforming/traversing the landscape and some light puzzle elements. Much like the other versions of the game, the entire game takes place inside of a castle now being controlled by Hydra and Baron Strucker. So you’ll be finding yourself traverse various parts of the castle both above and below grounds. 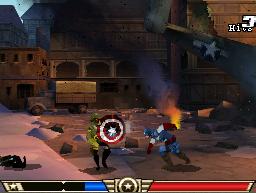 types of combos. As you perform combo moves and shield throws, a meter on the bottom left-hand fills up. About half way, and you are able to unleash a mega move, if you are lucky enough to get it all the way up, you will enter “Super Soldier” mode which makes Cap near invulnerable to damage and with added strength to boost! This system is a risk/reward of course because the meter will deplete if Cap takes any damage so do you risk filling it up for the rush or using it once it becomes available? It adds an extra layer of strategy to the combat, but I found it rather easy to fill up without taking much damage.

In addition to the combat, the game showcases Captain America’s fantastic agility as you are able to run up walls, wall jump and many other acrobatic moves. Â If you hold down and the B button, you are also able to do a super-jump, which will be needed to jump some obstacles from time to time. 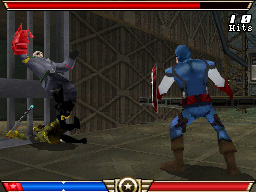 Finally, to break up the combat section, there are stages which the developer described as Robot Unicorn-inspired. These levels have Captain America running down a path (the two I checked out were the castle’s entrance and the sewers) with various obstacles to jump over and enemies to shield-bash. The goal is simply to make it to the end, but you gain bonus points for collecting medals throughout the stage. It was a fun little diversion, and I can see it mixing up the game if not done too often or becomes increasingly frustrating.

The game play is fun, but does nothing special, but I must make special note of the game’s sense of humor. As you will see with other versions, this game kind of goes for a goofy, Golden Age inspired feel for it. The dialog and interactions between characters never take themselves too serious. There’s a scene I witnessed in which one of the hired goons got enraged and red smoke started coming out of his head, he then charges Captain America who simply side steps him, and he runs into a barrel of explosives. Simple, but effective and gives you a good idea of what to expect from the game tonally.

All in all, Captain America won’t re-invent the wheel when it comes to beat’em up, but if you want more Captain America action after seeing the movie, you could do worse.