The Uncharted franchise has always been the video game equivalent of a rollercoaster ride. Filled with as many twists and turns, ups and downs and holy shit moments as the best. There’s also the feeling that you are being taken for a ride, one that you aren’t always in complete control of, but have a ton of fun nonetheless. Uncharted 3 doesn’t break new ground for the franchise, but does it live up to the lofty highs set by itsÂ predecessors?

Nathan Drake has always been the heart of the Uncharted franchise, and the third entry finally gives us a chance to delve into his past and more importantly what drives him as a character. While the thrust of the plot involves Nathan and his colorful cahoots search for “The Atlantis of the Sands”, the real weight is carried by Drake’s own motivation. As several characters point out throughout the adventure, he is risking life and limb for a possible discovery, but there’s something much more at the core. And this is one of the plot threads, I think Naughty Dog handles terrifically, the pay-off is a simple scene or two near the end, but as a player it gave me and Nathan the closure we wanted.

The rest of the plot, at this point, has become formula. Drake and friends find some bearings about a mysterious treasure or civilization, they go on globe-trotting from hint to hint, while the entire time being pursued by an evil group. More often than not, Drake discovers the next piece of the puzzle, but the bad guys are only a step or two behind, they show up, you engage in battle, and move on. After a while, it does become humorous just how often the villains catch up to you especially after you de-activate all the traps and solve the puzzles that come with these ancient civilizations.

The story gets the job done, but really the stars of this production are all the side characters. Over the course of the trilogy, we have gotten to know and like several characters, and almost all of them make a return in fine fashion during thisÂ outing. Sully’s role in the game is expanded, and his back story fleshed out. You really feel the bond between him and Nathan more than any effort before this. We also have the return of Chloe, who’s role in this game seems to be minimized a great deal, and I was slightly disappointed by that. And of course, we have Drake’s love interest, Elena, as always her story offers the most interesting insight into Drake and his life.

The story and characters can only carry the experience so far, but they do a damn fine job of carrying it. The core mechanics of Uncharted have never been more refined. While, you won’t find much new in the way of game play, everything here has been improved over Uncharted 1/2. Though, that also comes at the price that some of the general nitpicks of the series remain. 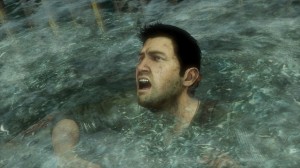 The platforming/exploration, which makes up the bulk of the series’ core game play is just as breath-taking as always, but also just as confining. Don’t take that jump the right way, no Drake won’t attempt to grab on or anything, justÂ plummetÂ to his death. The same with the platforming segment, there is no right or wrong way, there is only the game’s way. But as I said at the beginning, this is a rollercoaster ride, sometimes you need to be taken on the adventure and just enjoy it.

And enjoy it you will, the game gives you a ton of variety in environment and obstacles. You’ll run across rooftops, you’ll enjoy some fun chases in the desert, you’ll traverse ship wreckages and burning buildings. The game never keeps you in one environment for too long, and it really works for the adventure. You feel like a globe-trotter when it is all said and done.

Drake just won’t be visiting these locations either, as often happens when treasure hunting, forces are working against Drake and his team so you will get into a ton of shoot-outs during the course of the game. The shooting mechanics of Uncharted have always been a mixed bag for me. While, you get a nice variety of weapons from pistols to snipers to shotguns, it always feels like you end up dumping most of your ammo to dispatch only a handful of enemies. I mean honestly, what type of upper body armor protects you from two grenades to your foot? But at this point in the series, most fans have grown accustomed to the shooting mechanics of the franchise, and they work. Just not as well as one would like.

Aside from a lot of platforming, the game also sprinkles along several chase scenes. Most of them are on foot, one is on the back of a horse and there is a rather trippy segment or two, which I won’t ruin, but was interesting nonetheless. The chase scenes are fun for the most part, but some have the odd camera issue where you are either at an odd angle or running into the camera which makes it hard to pre-plan, but none of them are too difficult. 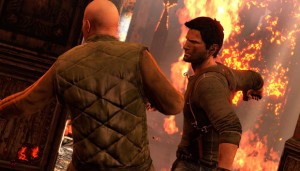 One addition/improvement to the shooting segment is the melee system. While it has been present since the first Uncharted game, it is giving a little bit of a cinematic flair with this 3rd entry. Drake will incorporate weapons into his hand to hand more often. Sometimes, he’ll pull the pin of a grenade on some dude blowing him up, other times he’ll kick away a thug before grabbing their gun and opening fire on his partners and my personal favorite using the butt of your gun as a golf club to knock some people out.

While I dig the combat during intense gun fight as it adds a bit of variety, Naughty Dog went a little too far with their melee system. Perhaps, they thought they had stumbled upon the new big improvement for the franchise, but they added several melee only brawls into the game. And I’ll be honest, they do nothing for me. The melee system just isn’t exciting enough to cover these segments, and there are at least half a dozen of them.

The biggest problem I have with them is just how limited Drake’s moveset/animations are during these segment. For a game that really likes the little details, it just seems like not a lot went into the melee animation. For example, almost every fight against a “brute” character will go like this, three punches, dodge, three punches, get him to his knees, dodge, he gets up, attempts a kick, Drake dodges, punch punch, kick to the nuts, dodge, punch punch and then a diving punch to finish him off. I may be forgetting some steps or have them in the wrong order, but tell me if almost all encounters with Brutes don’t end up going that way.

Not only was the lack of animation/variety a sore spot for me, but there are games on the market that just does melee better. When it was just a part of the general gunplay, it was fun and different, most shooters don’t have a system as refined or detailed, but highlighting it as another part of the game, it really just stands off as weak.

The final piece of the Uncharted 3 game play system is of course the puzzles. While they have never been too many in the games, they are always a bit of fun. You get a lot of hints with Drake’s notebook, but it doesn’t take away from the core puzzles. This game is filled with some interesting ones, my favorite was lining up structures in a room to complete a “picture”. It was interesting working on the various angles to make the structure come to life. I wish the series would incorporate more puzzles into the series. They are perhaps one of the most unique aspects of the game and have always been severelyÂ underutilized.

The story is solid, the characters are better. The game play is a Jack of all Trades with some aspects stronger than others but makes for a solid experience. This package is all tied together with its fantastic presentation. There are few games on the market that compare visually to the Uncharted franchise. Uncharted 3 is no different in that regards. Character models have been improved. Environments are more detailed. And its colorful! Yes, it isn’t a Disney movie, but it uses real world settings so you have a ton of colors on display, which goes a long way for me. I really can’t think of any complaints for the game’s visual sense.

And while I haven’t played the game in 3D, I did get a chance to check out some 3D game play at a recent AMC event, and it really does look fantastic in the game. So if you have a 3D TV, its worth checking out for that, but wouldn’t recommend buying a device to just play the game.

Audio also plays a huge part in the franchise’s success, and once more the game doesn’t disappoint. The music just seems to always hit the right note to give you that presence you need without ever been overbearing or distracting. Most of the songs wouldn’t be out of place in a movie, and even work as independent listening, which isn’t always the case with gaming. 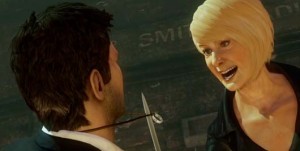 More importantly though is the voice-acting, Nolan North has become the go-to voice for video games because of the Uncharted franchise, and you get to see why again here. His Nathan Drake has always been one of my favorite video game characters because of his quick wit and snarky comments, but I’ve also love the way he comments on the world around him. To me, that has always been the most enduring aspect of the character is that he is aware of his surroundings and the story that’s being told. It is one of my favorite ways to actually tell a story in a video.

Recommendation: Buy It– This is Uncharted 3, at this point in the series, you know if you are a fan or not. If you are a fan, Uncharted 3 provides all the highs you expect from the series. Whether it is better than the 2nd entry is a matter of taste.

If you aren’t a fan of the series, you will find nothing that will change your mind really.

At the end of the day though, this is one of 2011’s finest game, and I recommend it highly.