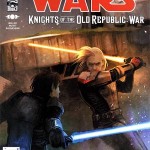 Zayne Carrick is back to finish off the last issue of the Knights of theÂ Old Republic: War mini-series. The team has remained the same throughoutÂ the limited run with Miller on the script, Mutti on pencils, BaldassiniÂ taking inks, and Atiyeh providing colors. Before we start, since this isÂ the last issue of the limited series, I’m assuming you read the previousÂ issues, so there will be spoilers from that material. If you’ve not readÂ any of the arc, I suggest reading one of my reviews on an earlier issue,Â rather than this one in particular.

Since the same creative team remains on this issue, the art is very muchÂ the same as seen previously. To sum it up, it’s a rather unique combinationÂ of busy and minimalist. It’s a little hard to explain, so hopefully theÂ screenshots help out some. The inks are very heavy and cut pretty harshÂ lines, leaving the colors to shade and even things out. To be honest, I’mÂ not much a fan of it, but that’s more of a personal choice, really. It’sÂ not that the art is bad by any means, it just … rubs me a little wrong, IÂ suppose. It feels more busy to me than it needs to be. 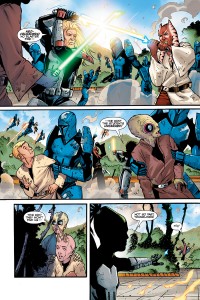 In terms of the story, I have some stronger issues, unfortunately. We joinÂ up with Kace as he gets to the Jedi Temple, executing his plan to kidnapÂ all the younglings. After telling his soldiers not to harm the students,Â one of his “Neo-crusaders” (I’m seriously not joking, he really calls themÂ that) force flings the bejeezus out of a youngling like the poor child wasÂ full of candy and hanging from a tree. So much for unharmed. This is just aÂ small example of how I feel the writing was handled as a whole.

Motivations are confusing and I have trouble understanding why someÂ characters do what they do. Zayne has his sameÂ nobody-has-to-hurt-anyone-else attitude, which, having read the Knights ofÂ the Old Republic series, I have come to expect. Kace, on the other hand,Â befuddles me. He wants to end the war sooner to save lives, but he believesÂ the Republic cannot change. The Republic is also corrupt because a JediÂ killed his Mandalorian love during combat and he hates Republic Jedi forÂ that. A stretch, but okay. However, if that’s the case, why is he so gruffÂ and uncaring about killing others in this war? I have a hard timeÂ reconciling the hatred for Jedi due to killing during war and then he goesÂ and treats this war the same way–people are casualties and that justÂ happens. On top of that, if he’s mad about losing his child, why is he thenÂ running off to kidnap other children? Clearly, I’m investing a lot ofÂ thought into this character and his choices, but isn’t that a major portionÂ of reading? 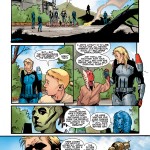 The dialogue is rough, obtuse, and sometimes confusing. Kace rounds up theÂ younglings and tells them all they will become Mandalorians. A studentÂ actually responds, “But–the Mandalorians are the enemy of the Republic!
Aren’t they?” I get that they are younglings, but this kid is gettingÂ kidnapped from his home and his teacher was literally just put in chains,Â yet five minutes after the fighting stops he’s confused if the MandaloriansÂ and the Republic are enemies? I think our padawan may be a little slow.Â Things like this plague the pages of the whole mini-series, and this issueÂ as well.

Recommendation: Borrow Overall, if you have invested the time in the previous four issues of theÂ series, you may as well go ahead and round out the arc with this finalÂ installment. If you are considering this for younger children, feel free toÂ pick it up. The arc is very black-and-white in its handling of what’s goodÂ and bad, acceptable and morally reprehensible. That makes it decentÂ material for a younger audience, but also muddles characters’ motivationsÂ and makes for a relatively shallow reading experience for more matureÂ readers. If you haven’t kept up with the previous issues in the limited orÂ are not buying this for your kid, I’d suggest steering pretty clear of thisÂ one. Its simple and clumsy handling of what could have been complex andÂ morally ambiguous topics leaves me frustrated.