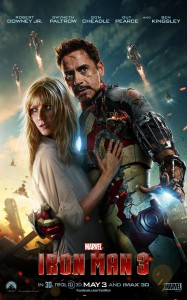 The Marvel Cinematic Universe continues with the latest instalment: Iron Man 3. The first ‘solo’ movie since the smash hit Avengers, Iron Man 3 goes down the road of being personal with the beloved Tony Stark. The film also see’s Shane Black take the helm as director, after Jon Favreau did not return for the job, and instead focused more on his Happy Hogan role.

Iron Man 3 is based on the well renowned comic book arc titled Extremis. Extremis is a science experiment funded by the military, with gives the user super-like abilities. In Iron Man 3, it turns people into walking bombs. The bombs are used in terrorist attacks organised by one of the films antagonists The Mandarin.

On top of that, Tony is dealing with some problems of his own. I was telling anyone that would listen that The Avengers was the huge all night party and Iron Man 3 is the morning after, were you can think back on a great night had or feel terrible. I wasn’t that far off with how Tony would be feeling. Since going through the portal at the end of The Avengers, Tony is now suffering anxiety attacks. He was a man firmly grounded in his own reality and sciences, but in The Avengers he was exposed to aliens and super natural beings. Naturally this would effect him, since he’s a Marvel character and doesn’t get up, brush the dust off, and get on with things after an experience like that. The anxiety attacks also give Robert Downey Jr a chance to do some attacking outside of his usual Tony Stark role. Of course, this does mean you have to have seen The Avengers before Iron Man 3 to fully appreciate this, but given that this is a 3rd movie, and a sequel of sorts to the billion dollar earning Avengers movie, that’s okay. 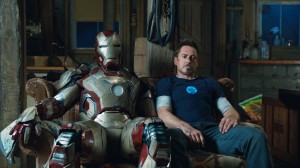 Tony also has a new rival in the form of Guy Pearce’s character Aldrich Killan. When we’re first introduced to Killan, he’s a bespectacled science nerd with a bad limp. So when we meet him again 13 years later, and he’s turned into this handsome well dressed business man, it’s clear that something’s going on with him. Pearce shines when he gets to act the rich asshole, and it’s clear that he’s enjoying himself. His motives are also not very complex, but they don’t need to be in a summer blockbuster (see: Die Hard).

Another antagonist for the film is Ben Kingsley, who plays the classic Iron Man rogue The Mandarin. I cant really say much about his character without going into spoiler territory, but Kingsley is great in the role. The filmmakers have also made a clichÃ©, caricatured comic book villain work in a modern movie. The terrorist attacks he’s behind, and the propaganda snippets placed throughout, could seem really out of place in a super hero movie. But in the end (I’m being vague again to avoid spoilers) it works, and like he says in the trailer “you really wont see him coming”.

All this, and Shane Black still gets some of his creative fingerprints on it. The narration throughout is very reminiscent of his and Downey Jr’s last outing together ‘Kiss Kiss, Bang Bang’. He was a good choice for a film that’s personal to the character of Tony Stark, which is the exact direction it needed to go in. 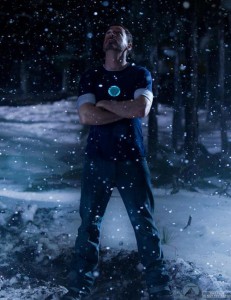 I found myself having one problem with the film though: I’m not quite sure why it’s set at Christmas. It’s probably just so we could get some pretty shots of Tony Stark dragging his Iron Man armour in the snow, but it didn’t really add much. It also didn’t draw too much attention to itself though, so it’s not that big of a deal.

Iron Man 3 is a step up from Iron Man 2, and it’s a good start in the direction Marvel Studios are taking their movies until we get another Avengers movie. We need stories that feel important to the character the film is titled after, so then we’re not sat wondering were the rest of the time is. Also — it’s pretty fun.

Out of 7: 5 – Good. Because it is good. But at times, it feels like it’s missing Â something. And even though they try their best to avoid it, the ending still turns into Transformers.