Rail shooters seem to have gotten a negative reputation this generation. Part of it is that Nintendo fans grew tired of companies like Capcom and Sega using rail-shooters as “Test” games for the hardcore market. It doesn’t help that the attitude was carried over with Kinect and Move. Perhaps folks are bitter towards them because they do tend to simplify a fairly popular genre with the shooter. Whatever the case may be, rail shooters have been railed on (pun intended) this generation.

That doesn’t mean though that we haven’t gotten a slew of amazing rail shooters this generation. From horror staples like Resident Evil and Dead Space to more silly stuff like Ghost Squad, there has been a ton of quality rail shooters. But there is one that stands heads and shoulders above the rest to me, and that is House of the Dead: Overkill. 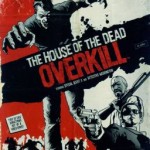 House of the Dead: Overkill was the 5th game in the House of the Dead series, and the first one created exclusively for the Nintendo Wii (later ported to the PlayStation 3 with additional content). While it is the 5th game produced, it is actually a prequel to the entire series focusing on the characters of Agent G and Isaac Washington.

This game serves as an introduction to Agent G, the star of several House of the Dead games including the original. He teams up with local beat cop, and all-around curse magnet, Isaac Washington. As G and Washington look to run down a local crime lord, Papa Casear, they run afoul of a lot of creatures and mutations. The story isn’t the most interesting aspect of the game, but it does get the job done.

What really helps the game though is its presentation. The game is presented in film grain, giving it this grindhouse feel and look. Partially though, I imagine to hide the limitations of the Wii, the game does a terrific job with this style. And it’s not just the filter applied over the screen, but the chapter select and even the menus retain the feel of the main game. It is a very nice package on presentation alone. 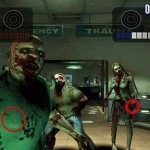 In addition to the visual presentation, the sound and voice really add to the entire package. The music is upbeat and cheesy at some times, but extremely catchy and memorable. Each stage/chapter is given a distinct theme and it really works well. The voice acting is top-notch. Again, I will never fault a product that knows what it wants to be and go for it. This game never attempts to be taken seriously so when characters are melodramatic and over the top, it fits in with the general atmosphere of the game, and only adds to your joy.

A clever presentation and fantastic sound design can only take you so far though. How does it all work? Well, it is really difficult to screw up a rail-shooter, not impossible, but really difficult. Since the player isn’t in control of their movement, it is up to the designers to create experiences that are fair, but tough and never feel cheap. House of the Dead: Overkill seems to excel at this well. There was never a time in the game where I felt the game was giving me unfair enemy placement or too small a window to attack.

The shooting is tight and responsive. There is a bit of recoil to your guns, and this of course needs to be factored in when lining up shots. One because you need to compensate, but also because the game has an in-built combo system that rewards you points forÂ consecutiveÂ shots. You also earn bonus points for head shots, picking up brains scattered around stages and saving hostages. As you rack up these points, you can use them to continue if you happen to die in a stage, or at the end of the stage get a letter grade for your performance. 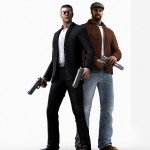 The points are also converted into money which you can use to upgrade your weapons and buy new ones. This adds a bit of strategy to your game. As I believe, you are able to carry two weapons into battle, and you want a combination that favors either brute strength (having a shotgun is always handy) or stuff that is better suited for precision and racking up combo abilities. Either way, I thought the system was great, and it also encouraged me to replay stages with upgraded weapons to up my score and unlock better weapons.

The replayability is a huge component of the game as well since the game isn’t the longest thing in the world. It can be bested in a few hours, but you do unlock a tougher mode and have the ability to replay all stages to increase your scores. Your mileage will obviously vary, but at this point the game can be found for less than 20 bucks in most places.

House of the Dead: Overkill is easily the best rail shooter of the generation, and I would go as far as to say one of the great games of this generation. It makes great use of the technology by crafting its own identity as a grindhouse game, and top-notch voice work. There is a lot of meaty morsels to be found in this package.