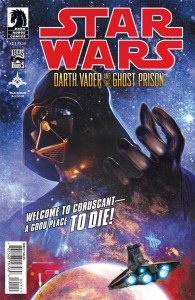 Dark Horse is releasing another limited series, this time focusing on Vader and some incident code named Ghost Prison. The creative team had me intrigued, as it’s a curious juxtaposition of experience and relative obscurity. This issue is scripted by respected vet Haden Blackman, who also wrote Darth Vader and the Lost Command, both The Force Unleashed entries, and plenty more. On the art side we find Agustin Alessio, of whom I know relatively little about. In fact, other than this series, the only association I know of him is some Doctor Solar, Man of the Atom.

There’s actually quite a bit to say about this issue, which caught me off-guard. Beginning with our lesser-known contributor, the art is, overall, exceptional. The pencils and ink are very clean, leaving the colors to do most of the work. That is really where the art shines, however. The colors blend well and have a unique feel. Areas like clouds, fires, or smoke all have an ethereal quality to them, striking a clear dynamic from the strict lines of the ink. The frames are broken in mostly straightforward manners, although changing by degrees into a relative chaos of odd proportions and curious angles during times of turmoil or confusion. My only qualm is that the backgrounds of the frames are all a black and white mosaic of sorts. It sometimes works well, but frequently can be distracting. It’s an interesting method to try to employ, and I can see it being of good use in the future, but its execution here leaves something to be desired. 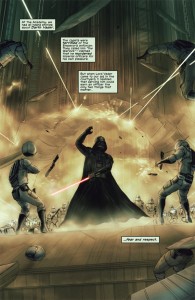 In terms of story, I had high hopes for the issue. The Force Unleashed was quite possibly my favorite script of Star Wars that I’ve ever read. However, I’ve also been on a string of disappointing reads lately, so I was initially uncertain. Luckily, the vast majority of my concerns have been assuaged. The story focuses on a time period shortly after the Empire takes over. Thousands of recruits across the galaxy are being trained to be officers in the Empire and they are all gathering for a PR spectacle as they graduate from their respective academies. This issue focuses on one such recruit, Laurita Tohm. Thom is a more complex character than expected, he’s graduating valedictorian, but also has the glaring physical complications of having the left side of his body seriously disfigured (assuming from injury), including the lack of a left arm and functioning left eye. The issue makes clear his loyalty and describes some of his motivations, but cleverly leaves a lot to be discovered in the coming issues. One of the things I feel Blackman does best is leave points open for intrigue, possible twists, and further development, and this issue is no exception. How did Tohm lose his arm? Who is responsible for the chaotic activities in the issue? What is the truth of the headmaster? I’m definitely hooked for the next installment.

My only concern thus far has been some abuse of the coincidental to make the story work, which is a pet peeve of mine, but have completed the issue rather pleased and looking forward to where the arc may lead us. For those of you hoping for a ton of Vader, I can’t speak for the future issues, but this oneÂ doesn’tÂ have an exceptional amount to do with him. As for where the arc goes, anyone could say. However, it is nice to get a new perspective from the outside of the main characters of the universe, which is something thatÂ doesn’tÂ happen frequently enough in Star Wars.