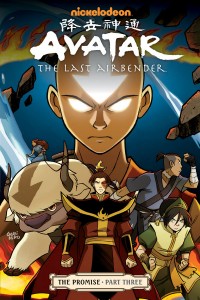 Avatar: The Last Airbender: The Promise, aside from being a mouthful of a title, continues the story of Aang and his friends after the end of the original series. We reviewed the first part of this arc earlier in the year, and now we return for the final chapter in the “Promise” arc. As a brief recap, the “Promise” arc deals with the colony of Yu Dao, which is a fire nation colony that originally belonged to the Earth Kingdom. Now that the Harmony Movement is in effect, Aang and Zuko have opposing views on what to do with the city. At the end of the second part, the city was readying for an all-out war.

The Promise also deals with a deal brokered between Zuko and Aang that if Zuko ever begins to exhibit traits like his father that he would want Aang to end him before it went too far. The opening of Part 3 plays with that as we see Aang and Zuko on the battlefield, their spirit guides telling them what needs to be down. Aang finally decides to fulfill his promise and ends Fire Lord Zuko. Both men wake up in a cold sweat from this dream sequence, and this scene sets the tone for the rest of the book.

What made Avatar: The Last Airbender work so well was the fact that the characters were so rich with emotions and complex decisions. The Promise 3 continues that as Aang and Zuko both have their moments of doubt about their course of action, which is only compounded by the fact that they can not confide in each other. Actually, both men spend a great deal of time in consul with people who actually aren’t there.

While Aang and Zuko’s conflict has always been central to the plot of Avatar, there are a lot of moving parts and characters. Like mentioned before, Yu Dao is the battleground for this series, and it is interesting to see how relationships between the various nations have evolved while remaining somewhat the same.

Yu Dao is a battleground between the Fire Nation and the Earth Kingdom. Both camps have compelling cases as to why they should lay claim to the city. For the Fire Nation, it has become the home for many of their citizens during the war, and while it was taken over by force, it wasn’t by the citizens who currently reside there. On the other hand, this was an Earth Kingdom city and it only makes sense that control returns to the rightful nation. Aang and gang are faced with a difficult decision, and there are some interesting twists and turns along the way.

Avatar has always been great at telling stories, but its real strength has always come from the cast of likable and memorable characters. This book gives them all their moments to shine. And it’s not just the usual cast, but some of the returning characters, big and small, that end up putting a smile on your face. I won’t ruin too many moments, but there are many a happy reunions and exchanges in this book.

The Avatar spirit is well and alive in this book. I’m not really sure how to explain it, but Avatar had this amazing ability to combine animation/design, characters and world building into this neat little package and make it look so easy. Sure, the comic benefits from the fact that most of the world-building had been done in the TV show and the character development, but it still does a remarkable job in continuing both areas. 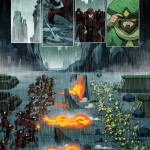 The art in the book is wonderful. Nice, bright colors which really brings alive the world, much like the animated series. Characters who are detailed, and with nice facial details and expressions. Backgrounds are handled well, and some great use of shadows. There’s really not much in the way of negatives about the art on display in this book.

I also want to point out just how fluid the art is in this book. I know fluid is an odd term to use when describing a static photo, but part of Avatar’s appeal has always been the bending/fight sequences and this book does a terrific job of putting that in print. You get to see some truly stunning uses of powers in this book and it feels alive. Kudos to the artist for that.

If I did have to mention some negatives from the book is that it continues to hold the story of Zuko’s mother’s disappearance as a dangling carrot for the audience. Always teasing some type of progress or advancement to the storyline, which never really comes. And the book lacks a proper conclusion. Instead, we are treated into an ending that leads into the next major Avatar: TLA comic event, titled The Search, which will deal with another old character. While I am looking forward to that book, I wish they had given this chapter a better ending.

King (Diamond Standard)– This is a solid book, and even a solid mini-series. I would have rated it higher, but the fact that it doesn’t really offer a satisfying conclusion after all these months leaves me just a bit bitter. That said still worth checking out, and hopefully the Search lives up to this series’ high standards.