Most superhero comics don’t speak to me. I don’t have superpowers and luckily, I don’t have any supervillains. That said, I do enjoy reading them most of the time because there are fun stories. 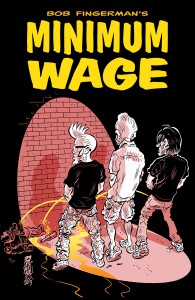 Looking at the cover of Minimum Wage 4, I knew it would be a book I could relate to from the word go, and for the most part it was. This issue isn’t really about much, but that’s kind of what life feels like in your 20s. The comic stars Rob, a young, recent divorcee who is trying to make heads or tails of his life in the wake of this.

He is looking to move into a new place, and draw kiddy and smut comics for pay (he makes sure that neither crosses over), He is just a man living life and taking the events as they come. There isn’t anything resembling a plot in this issue. By the end of it, nothing seems to have been resolved or advanced, but that’s just the way life is. A week in your life may not amount to much in the week, but a year down the road? The new place he got? The new job he got? The stranger he met in the bar? Could all be vital parts of a more interesting, vital story.

And I want to sure, I’m not criticizing the lack of plot, but actually commending the book for it. It realizes that sometimes life can be interesting without conflict and resolution. In my own time, I know how silly one can get when drunk to wash away a bad week. And who hasn’t partook in a public urination (as depicted on the cover), it’s a really fun book to read.

The art was a bit hit and miss for me. I enjoyed the color usage. It’s not quite a black and white book as it adds in a very light blue which really does help accent a lot of the scenes. It gives it a lot more life than a pure black and white comics, while not needing as much detail or color as a normal book. Where I have issue is with the look of a lot of characters. They have these weird designs, which I don’t mind since it is uniformed but some of the banana nose and designs of women just seem off. Like it stands out in this style, and not in the good way. None of it a complete turn-off though.

Review 6 (Out of 7): Seinfeld made a living out of a TV show about nothing. Let’s hope Minimum Wage could find a similar market.Â