As far as surprised announcements go, Power Rangers Mega Battle is up there for me when it comes to New York Comic Con this year. Announced (I guess?) with little fanfare via Bandai-Namco’s Twitter account, all we got were a name and a logo. 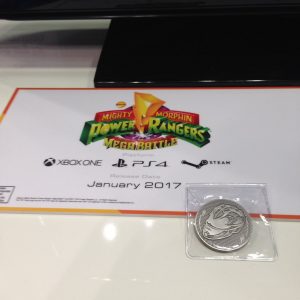 And the only gameplay footage remains some off-screen capture from a Twitter user.

As a lifelong Power Rangers fan though, I had to know more so I rushed over to the Javits Center during my lunch break with one goal in mind, getting some hands-on time with the game. And after about 15 minutes with the game, I’m left with the possibility of picking it up if the price is right.

At it’s core, Power Rangers Mega Battle is an old-school beat ’em up. You have an attack button, another attack button, a projectile/range button, jump, grab, roll/dodge and super move. Pretty much your standard fare for the genre. The only real wrinkle I saw is that you can start levels de-morphed and have to earn enough energy to morph. Sadly haven’t come across any Megazord battles yet, though it was teased in my hands on with certain scenes being stopped with background tremors.

Now while the basics remain the same, not all games are created equal and I found that the action really was kind of sloppy in this game. Don’t get me wrong, it’s responsive, but sometimes the game is a bit over eager. Like the fact that you can’t really seem to change directions too much mid-motion which makes enemies attack from your rear a bit of a problem. Though honestly, and hoping it’s for the demo, the AI was dumb as bricks. Mostly just standing there to be attacked. It would be sprinkled randomly with a fight with a shielded enemy who was a bit tougher, but that was about it.

Speaking of enemies, there weren’t much variety to them in the demo. Putty and Putty with armor on (and not the fancy ones sporting their Z) and the aforementioned shielded enemy who didn’t look like any Ranger monster I knew (though my knowledge isn’t exhaustive).

Going back to the combat, the thing I found most humorous was the grab function since you left the Putty over your head and can slam them into the ground repeatedly. It’s a fun animation.

In addition to that when you charge up your Ranger meter, you are able to go into like an enhanced state which allows you to attack faster and more powerfully. It seems to be on a timer and lasted for about 10-15 seconds or so. 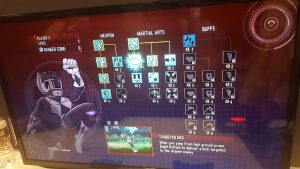 The game play isn’t broken, but not special, but what makes me think this game may have some legs is it does have a leveling up system in place. So after missions, based on you collecting something you are able to power up your character. Give them buffs in health, new attacks or team moves and the likes. Hoping this allows each Ranger to feel distinct because based on the demo they all control and play the same.

There was no attendant at the booth while I was playing so wasn’t able to answer some of the questions I wanted. With the way the screen is set-up it seems like you’ll be able to play 4-player co-op (or maybe 5 if they are nice), but was only set for 2. The name seems to imply it’s only the Mighty Morphing era but with a new movie on the way and plenty of shows to draw from is it possible that other generations of Rangers will appear? And most importantly, how is this game going to roll out. Like based on it’s short turnaround (only about 3 months) and graphics, I’m hoping that it’s a digital release, but you can never tell in this day and age.

If nothing else, Power Rangers Mega Battle is on my radar until we get more information, but it has potential.