Due to scheduling of this year’s NYCC panels, I had the chance to checkout two back-to-back DC and Marvel comic panels. On Friday, I saw a Marvel’s Avengers followed by DC’s Batman panel and on Saturday I got to sit-in on Marvel’s Cup of Joe and DC’s The New 52 panel.

The panels on there on aren’t so bad, and you can probably find all the big news and highlights posted on other sites. What has always intrigued me about the panels though are the audience questions and answer segment. It’s the time when fans attempt their best to pry secrets from the panel. Some of them are non-starter, while others offer tantalizing teases of the future. Most of the tidbits from this year’s panels can once again be found elsewhere such as the return of Stephanie Brown and teases of the first female-centric Marvel movie/TV series.

That said, if I’m sending you elsewhere for all the news, what is the purpose of this article? Really to talk about an observation I made while listening to four hours of panels between these two companies. 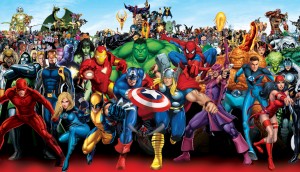 The first observation is pretty simple, but comic books aren’t exciting to showcase. Most of the panel discussion was focused on covers and unfinished pages from upcoming comic books. I get that it is a visual medium, and really not much else to do, but staring at pics isn’t as exciting when coming from a video game, movie or television presentation.

While comics have such a short turnaround time (from when it is finished to when it is published), there isn’t a lot they can do to punch up teases, but I would love like a motion comics-esque trailers/recaps of popular series. Would be a nice introduction to the panel and the speakers and does inject a bit of life into the presentation.

This one is just a personal stance though. Based on the pack rooms and the reactions, most fans are content with just teases and covers. And I won’t fault them for that. 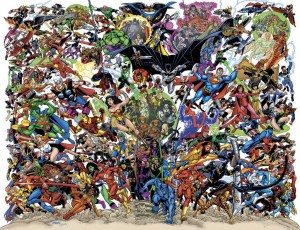 The second is more pressing matter, especially to one company, and that’s the questions posed by the fans during these panels. During the Marvel presentations, the fans wanted in on future projects. Wanted to be teased and taunted with what’s coming down the pipe. While the DC presentation was focused more on what or who was lacking in DC’s current output. Will we see the group from Young Justice again? When will Stephanie Brown return? Will Tim and Bruce ever work together again? Where’s Wally West? What happened to this and that plot line? The lack of minority and women representation both in comics and in the creative department.

Watching this unfold twice over two days, just made me think of where the two companies stood in the eyes of the fans. Marvel have fans in the palm of their hands, excited to hear any and everything about their future products. While DC fans seem to be distraught over the company’s lack of well everything. And DC’s tendency to either play their cards way too close to their chest or throw their cards in the air and picks the first one to land.

Two years into The New 52, and DC hasn’t been able to tell compelling enough stories to satisfy their core base without longing for what they lost in the process. Beyond that though, it seems like they haven’t satisfied their fans in different regards as well. Granted, their movies are currently in a state of pre-production (only one reference to Superman/Batman film and it was a positive for the casting of Ben Affleck), but DC doesn’t exist in other mediums. Batman does. And in smaller doses Superman does. But no one has any faith in them expanding beyond those two franchises, and it is a sorry state of affair.

I don’t know if it’s a good or bad thing that DC fans no longer ask them about that part of their business plan.

Marvel on the other hand seems to be playing the perfect hand of poker. They don’t have the best cards, and fans do notice some bluffs, but for the most part they can get away with it because playing with a confident face. Fans don’t question what is missing, but only what can be added to improve whatever they are currently offering.

Now here’s the twist, having fans happy is great for business, but doesn’t always mean great for the finished product. Take Marvel’s animated affairs, which I had a chance to attend their panels. Ask most folks and they’ll say not terrible cartoons, but also nothing special. But based on the reactions at the panels, some of the best stuff ever so Marvel never needs to challenge itself to do better. Sadly, I have no DC panels to compare to this since no other medium had a major DC panel sans the Justice League: War one, which missed out on.

I’ll be honest in the grand scheme of things, I don’t know what these panels represent for either company. It was just a curious observation to be made after hours of listening and watching. Let’s see what Comic Con 2014 brings!