Based off the 2011 crossover event Flashpoint, Justice League: The Flashpoint Paradox is the 17th film in the DC Universe Animated Original Movies line and the first to center around the Flash. 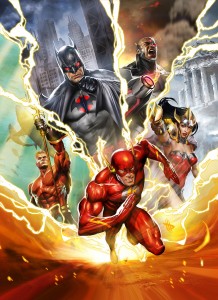 The Flashpoint Paradox tells the tale of an alternate DC Universe, in which Barry Allen never became the Flash, Superman landed in Metropolis instead of Smallville, Bruce Wayne died and was survived by his parents and many other rippling changes throughout the universe. It also tells the story of a world, not on the brink of war, but on the brink of total annihilation as the Atlanteans wage war with the Amazons.

The back drop makes for one of the darker and more bleak DC movies to date. None of our heroes are actual heroes in this world. The Batman of this world is a take no-prisoner drunk. Superman doesn’t exist. Wonder Woman and Aquaman are at war. Green Lantern and The Flash don’t exist. The only person who serves as a heroic guide is Cyborg, and even then doesn’t do much that’s super until the climax.

The writers of these movie probably saw that problem which is why we get an extended prologue with the Justice League saving the day. It is quite a fun sequence, and we do get to see The Flash’s powers in actions in some creative manners. It is also nice to hear some of the old cast back including Kevin Conroy as Batman, for a portion of this movie.

The movie then moves into this alternate reality DC Universe, and I already explained how bleak the film is. But I would point out that this is the longest running DC Animated film to date, and I feel one in which the time kind of works against it. For the first half of the movie, a lot of scenes seem a bit disjointed. Characters and situations pop-up for a scene or two and then aren’t really referenced again until the climax. There are certain scenes that need not be in here as they don’t add much to the overall story and would have helped with pacing. 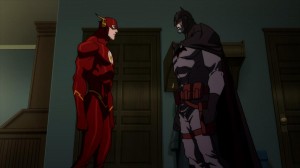 The "Heroes" of our tale.

One such scene is when Cyborg has a discussion with the President, and pulling the plug on his operations since he couldn’t get Batman to join his team. My memory is a bit hazy, but I remember it the comic there being more to that story with America launching a failed assault on Europe, but in the film it just ends there. No real build-up, no real pay-off. Just a random scene in the middle of the movie. 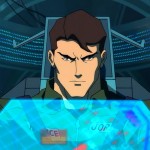 Another scene like that includes Hal Jordan, in which he attempts to fly an alien ship to attack Aquaman’s fleet and is quickly demolished by a sea creature. That’s pretty much it. In the grand scheme of thing, nothing in the movie would have changed by cutting that sequence.

Really the disjointed nature of the first act, and these extraneous sequences are the only real negative I have against the film. Everything else just kind of gels for me.

I already mentioned that Kevin Conroy returns as Batman for select scenes, but Kevin McKidd also dons the cape and the cowl and does a terrific job for this version of Batman. Nathan Fillion is always a treat as Green Lantern, and Dana Delaney reprised her role as Lois, who doesn’t get a ton of screen time, but makes it work.

The rest of the cast are mostly newcomers to the world of DC. We have Sam Daly, son of Tim Daly (Superman from The Animated Series), stepping into his father’s shoes as he plays a very different Superman in this film. Justin Chambers takes center stage as the Flash, and while we had a lot of Wally in our lives, it’s one of the first truly detailed Barry adaptions and he does a great job with it. Â Michael B. Jordan does a fine job as Cyborg, but he doesn’t really get much to work with. The cast overall just really works in this film. 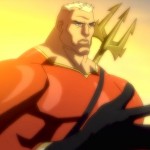 Also, I must confess I lied a bit earlier, the extra scenes weren’t my only problem. I also thought some of the character designs just didn’t work. Especially Aquaman’s really oddly shaped body and head. I found it distracting in a lot of scenes. On the flip side, I loved that Kandor got to make an appearance in this film and re-used his Young Justice model.

Aside from some questionable character design, the animation was top-notch in this film as well. Some scenes had the necessary weight to them especially the Flash’s final heroic deed which was lovely to see.

And as I’ve mentioned before the fight sequences. It was brutal, nasty, messy, sometimes uncomfortable but always worked. It has some of the more enjoyable fights in these 17 films. And the climax has a lot of shocking moments (if you’ve never read the source material), I was actually surprised they didn’t shy away from any of it. There are some moments that cast our characters in a whole new light, but they were never intended to be heroes. 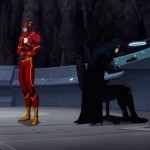 Finally, there’s the odd elephant in the room. Flashpoint, in the comics, was used as the starting point for DC’s “New 52” initiative, and many felt that it would serve the same purpose in animated form. It is in a weird place since the Animated universe doesn’t really have a cohesive world nor does the ending hint at anything changing. But we do know the next animated adaption is based off the first New 52 story arc from Justice League so who really knows.

Review: 5 (out of 7)– Justice League: The Flashpoint Paradox is a fantastic adaption of the mini-series from 2011, in some regards too much of an adaption. I felt the film suffered in the first half due to needing to include as many scenes and elements from the series, which didn’t necessarily have a meaningful payoff in the film. I also think some of the character models are off-putting, but your miles will vary on that.

I will say that this film is worth watching, and is one of the finest to come out of the series to date.Â

P.S: The film also includes a post-credit sequence which hints at the next major film, which was announced to be Justice League War this week.

Leave a Reply to Alice A Cancel reply