After getting his start in intergalactic travels with Mario in the Super Mario Galaxy games, Captain Toad and the Toad Brigade found themselves as part of 2013’s Super Mario 3D World. The Captain Toad segments proved to be such fun highlights of the package that Nintendo commissioned an entire entire game starring that plucky little adventurer and that brings us to this year’s Captain Toad: Treasure Tracker. Is the Captain’s first solo mission ready for adventure?

Captain Toad is an adventurer and as such carries a ton of useful tools with him at all times. Including his trademark headlamp. But the tools of the trade come with a price, the Captain can’t jump so you must navigate the game using his wits and speed to get through the maze that awaits. Along the way, he will pick up a handful of items that will help on his journey, but not too many. 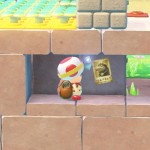 I was intrigued by how much content EAD Tokyo was able to get out of Captain Toad’s limitation without really breaking the base mechanics of the game. He can never jump in the game, but that doesn’t mean he can’t be shot out of a cannon. He’s a toad, and he is able to pluck turnips out of the ground, much like his brethren in Super Mario Bros 2. Sometimes, he is able to find a pickaxe and do some damage, but not too often. And because this inhabits the same universe as 3D World, double cherries are scattered around the world, and makes for some mind-mending puzzles.

The story set-up is fairly simple. The Captain and Toadette are on the hunt for a golden star when an evil bird swoops down, kidnapping the star and Toadette in the process. The Captain is off to rescue his friend and collect treasure along the way. While the bulk of the game is you chasing down this bird, Wingo, I do think the game put an interesting wrinkle on the presentation with their story-book lay-out.

The game is laid out into 3 books. The first book ends with you catching up with Wingo, knocking him out and rescuing Toadette. The two friends are happy to be reunited and do the most adorable dance and the credits roll. But that isn’t the end of the story, as there are two more books. The second book ends with a pretty sweet stage on it’s own, but instead of credits you get “To Be Continued…” and roll into book 3. To me, this reminds me (For better or worse) of movie trilogies. Where the first movie for the most part is standalone and expanded on with two more films with the 2nd usually ending in some form of a cliffhanger for the heroes so that the adventure could continue. Think of your Star Wars: The Empire Strikes Back, Matrix Reloaded, Back to the Future II or Pirates of the Caribbean: Dead Man’s Chest. 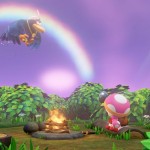 In between this very “cinematic approach,” you will find several dozen mini-puzzle stages. Set-up as dioramas, the stages simply ask you to navigate Captain Toad from the start of the stage to the golden star at the end. Some of these stages could be completed in less than a minute. The real challenge, and replayability, comes from the extras each stage offers. In addition to the golden star, each stage will feature 3 gems that you’ll need to collect to eventually unlock all the stages. These can be fairly simple to find, or hidden in such clever ways that you will spend your time spinning the camera to find the perfect angle to attack it from.

Finally, at least during the initial campaign, each stage also has a hidden objective. The objectives can range from collecting a certain amount of coins on a stage, finding hidden golden mushrooms, not defeating any enemies, defeating all the enemies or simply completing a stage in a certain amount of moves. Most will have you think differently as you go through the stage for a second or third time. While the objectives aren’t shown to the player until after they complete the stage at least once, you can unlock it during your first playthrough. So I made a little meta-game of trying to guess what the objective would be each time I went into a new level. Not always successful, but it added an element of joy when you predicted correctly and were able to unlock it.

Much like its parent franchise, Captain Toad’s levels are as varied as they come in a game. You have some typical ones like a fiery race through lava, some deep sea diving in underwater stages, everyone’s favorite desert levels and of course the ever spooky and confusing Ghost mansions. Each offers up its own unique challenge and visual. What I found most interesting about going through these typical Mario environments was how much Captain Toad’s gameplay changed your perspective on enemies and obstacles. 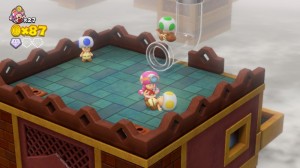 A moment to relax with the crew

While most people don’t consider Goombas much of a challenge, they do offer an unique challenge in Captain Toad when you’re unable to jump on their head. Instead of seeing em as a minor threat, it becomes a game of cat and mouse as you try to outmaneuver and outrun. The same happened with the Hammer Bros and Charging Chucks. The only enemies I found slightly easier in this game were the Boos since the Toads are always equipped with a headlamp which makes them easy to defeat.

Sadly, Captain Toad also brings along with it some of the downsides of EAD Tokyo’s designs. First, a reliance on reusing the same boss encounters. There are only two bosses in the entire game, one you fight 3 times, and the other twice. Then there’s the post-game content, which is fun, but has you going through some of the same environments, but this time with a harder task or to obtain a quicker time. 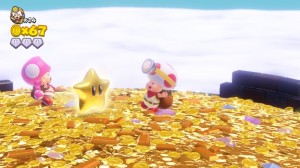 As an aside, and minor spoilers, one of those post-game secrets is the ability to unlock a handful of levels from Super Mario 3D World, which sounds like a great bonus. Except those stages are designed around the mobility (and power-ups) of the Super Mario characters. The stages aren’t really changed to befit the more limited repertoire of Captain Toad and Toadette and twas prove to be a huge bore for the most part. It really is disappointing.

On the flip side, the game also oozes EAD Tokyo’s trademark polish and charm. Captain Toad and Toadette are easily two of the most adorable characters to grace a video game this year. Everything from their nerdy little victory dances to the way they shiver in the sight of ghosts just endear them to the players. The game never stutters, and it looks absolutely amazing. Music is top-notch even if a handful of the soundtrack is recycled from Super Mario 3D World.

Review 6 (out of 7) – Captain Toad is pretty bang for it’s buck. At $40, you get a fairly meaty adventure-puzzle game that oozes charm and delight. The perfect pick-up and play game.