From Fandom with Love: You Only Live Twice

Or so it seems…

You Only Live Twice marks the 5th time that Sean Connery would take up the mantle of James Bond. It is also the film in which Bond travels to Japan for the first time, and a heavy focused is placed on showing some of the country’s traditions in this film.

There’s really not much else to say about this film. Other than it would add some of the final tropes for the Bond franchise. Namely, the villain’s over the top lair. While the prior films did have unique locations for their climax, for the most part they were fairly grounded (an island, a train, Fort Knox and on-board a Yacht)m You Only Live Twice would have none of that as the film’s climax takes place inside an inactiveÂ volcano. It would also be the proper introduction to Ernst Blofeld, who was the voice behind SPECTRE in From Russia with Love and Thunderball, and he would go on to cross paths with Bond in the next two films.

Let’s get on with the show! 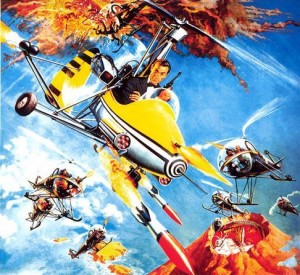 Our good friend Wikipedia with the score:

In the film, Bond is dispatched to Japan after American and Soviet manned spacecraft disappear mysteriously in orbit. With each nation blaming the other amidst the Cold War, Bond travels secretly to a remote Japanese island in order to find the perpetrators and comes face to face with Ernst Stavro Blofeld, the head of SPECTRE. The film reveals the appearance of Blofeld who was previously a partially unseen character. SPECTRE is extorting the government of an unnamed Asian power, implied to be Red China, in order to provoke war between the superpowers.

I’ve given a lot of credit to SPECTRE over these movies, and I’m going to do it again. The organization is extremely organized, detail-oriented and intelligent. Their plans are grand enough that only they can pull it off, but don’t lose sight of their goal, which is to generally make money. They also get their hands dirty as little as possible throughout the whole ordeal. 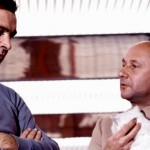 Ernst’s scheme in You Only Live Twice is no different, and would actually be repeated later on. It is fairly simple in it’s goal, but complicated in its execution. In order to start a war between the United States and Russia, SPECTRE has been messing with their attempts to launch space shuttles. Each time something goes wrong, the tensions between the two nations rises with the threat of war looming!

Throughout this all, Blofeld and the members of SPECTRE are off in Japan, off the radar of both nations. If not for the UK having cooler hands, and actually following the trails, war would surely have broken out.

And what is SPECTRE’s ultimate goal since a war between two nations wouldn’t actually benefit them financially? They are aiding a 3rd party country, which would become the sole superpower if war broke out between those two nations. SPECTRE would make huge bank from this country, and have an in for any of their future plans.

It is a fairly inspired plot!

Of course like all good things though, Bond comes to the rescue and thwarts their plans!

You Only Live Twice continues to play with some of the Bond girl tropes. We have the first girl to die while in bed with Bond (wouldn’t be the last), and we have 3 instances in which Bond’s love of women is his undoing. Including the cause of his “Death” in the pre-credits sequence. 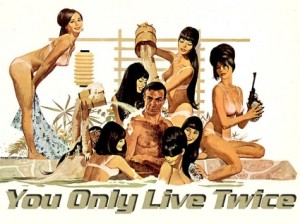 Aki– Tiger’s assistant who is able to lure Bond around during the first half of the movie. While not considered the “main” Bond girl of the film, she actually gets more screen-time and more interesting things to do than the main one. She is killed when she accidentally swallows poison that was meant for Bond. DEAD

Helga Brandt- I mentioned when talking about Thunderball that Bond was overly aggressive towards certain parties in that film. In this one, he’s protective to a fault and Helga is able to take advantage of that. She leads him to believe that he is helping her, and in return she would provide some key information. Instead, she is able to lure Bond into a death trap miles above the ground. Luckily Bond is able to survive, but Helga is killed by Blofeld for failing to kill Bond. DEAD

Kissy Suzuki– The first “Mrs. Bond” while she does marry Bond, it is arranged for his cover and he uses a different name! She is the main Bond girl in this film even though introduced fairly late into the film, and serves no other purpose than for Bond to have something to hit on for a few minutes. Thus far, I feel like she is one of the least developed main girls in the series. LIVE 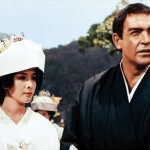 After Thunderball, I really thought we were going to hit our groove as far as Bondisms go, but this movie is remarkably light on them. Honestly sitting here, just about an hour after watching the film, I can’t really think of a scene or a line that stands out as truly Bond in this film.

Instead, I shall pick out another classic douche-Bond moment. After pursuing the person responsible for the death of Bond’s contact in Japan, Mr. Henderson, Bond confronts him in an office and eventually kills him. He goes to hide the body in a little area, and after he is done, he figured it would be a good time for a drink. He drinks a dead man’s vodka and then complains about the quality!

I said this segment would get a bit of an update. Instead of focusing solely on any card game Bond may or may not play in the course of a movie, it would instead focus on any form of entertainment that is on display.

In this case, Bond attends a sumo match at the start of the movie.

Sumo is a competitive full-contact wrestling sport where a wrestler (rikishi) attempts to force another wrestler out of a circular ring (dohy) or to touch the ground with anything other than the soles of the feet. The sport originated in Japan, the only country where it is practiced professionally. It is generally considered to be a gendai bud (a modern Japanese martial art), though this definition is incorrect as the sport has a history spanning many centuries. Many ancient traditions have been preserved in sumo, and even today the sport includes many ritual elements, such as the use of salt purification, from the days when sumo was used in the Shinto religion. Life as a rikishi is highly regimented, with rules laid down by the Sumo Association. Most sumo wrestlers are required to live in communal “sumo training stables” known in Japanese as heya where all aspects of their daily lives–from meals to their manner of dress–are dictated by strict tradition.

That’s your little knowledge on sumo wrestling from Wiki. Bond doesn’t get to enjoy most of the match though as Aki arrives to take him to Mr. Henderson, and thus begins the early events of the film.

After a brief break, we return to a female-driven Bond theme song in You Only Live Twice. It is also a fairly romantic sounding song, which fits in with the idea of the film. The song speaks of living your life until you find your true dream, which is love. Then it speaks about how love is a mysterious force, but you should do what it demands to really live again. Like I said, it was a really romantic Bond theme.

The credits are kind of a mixed bag. It is noticeable for being the first credit sequence which actually shows the face of the women in it, but the overall style is fairly stiff. Maybe they are attempting to pay credit to their idea of Japanese culture, but the women don’t have much flair to them. Most of them women are seeing bowing or just sitting there not doing much. It doesn’t make for the most excitingÂ imaginary.

The other thing that kind of makes this a somewhat lackluster opening is the simple use of stockedÂ volcanoesÂ in the background. Previous films have used the central idea of the film to craft the opening (like Thunderball), but this is done in such a lazy manner that it really doesn’t help you get excited for the film that is about to begin.

You Only Live Twice’s opening is a weird mash-up of ideas and a film. Hearing Nancy’s theme song outside the context of the movie, it is pretty enjoyable, but way too lovely for a Bond film that centers on action and over-the-topness. Combined with the rather bland opening, it really doesn’t have the weight one would imagine especially after Bond’s post death scene.

You Only Live Twice is an interesting experiment in the Bond-verse as they attempted to combine some of the mystery of the Dr. No film with the scale and grandeur of Thunderball. It doesn’t really work as well as one would hope, and sadly it is a format that many films would attempt and few actually get it right. It isn’t a bad Bond movie, but also not the best.