The A-Z of Geek Cinema: D is for Dark City 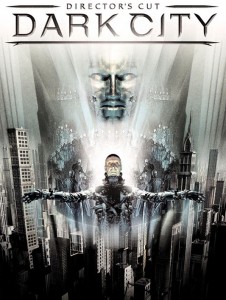 There was a brief period in the late 90s til about 2001, where there was a spate of weird sci-fi films, ones concerned with reality and consciousness, with whether the world was real or a simulacra. The Matrix, The 13th Floor, ExistenZ, and to a certain extent even Memento, came out in this time. Maybe it had something to do with the approaching millennium, some sort of fever of the mind that had people asking themselves what was real and what wasn’t. Presaging all of this was Alex Proyas’s Dark City.

The title of the movie is incredibly apropos, as the entire film just breathes darkness. Very stylized, highly evocative, and DARK. There is literally no scene in this film that is fully lit until practically the very end of the film. Of course, seeing as that is a plot point in it, it makes sense. The shifting architecture, evoking multiple times and places at once, is purposefully designed to unsettle the audience and give a sense of familiarity at the same time. Everything is shot to disturb, to give discomfort, to cause the audience to ask what is in the shadows, what is just out of frame. Spirals and clockwork abound, everything being circuitous and artificial in this world. 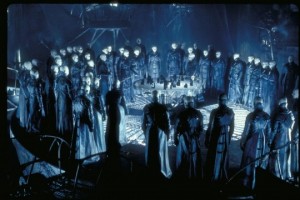 “What makes us human” is the going question here. The script doesn’t really push much with it, honestly. It’s a pretty standard “humanity is awesome because of reasons” story, but let’s be honest: the story isn’t why anyone is watching this film. It’s because it looks amazing. The cinematography, the production design, the costuming, everything comes together to make a very dark no­rish film that seems set in no particular time period. It’s very similar to Batman: The Animated Series in that respect. There’s mixtures of clothing styles, architecture, technology, all from different eras, including ones that haven’t happened yet. The way Proyas chooses to frame shots is very interesting as well. Lots of symmetrical framing, slow push-ins, and a very obvious connection to the German sci-fi/horror silent films of Murnau, Lang, and such. 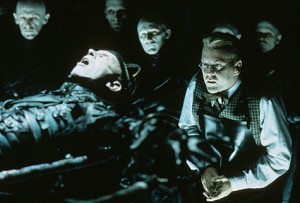 Most interesting though is the cast. Uniformly excellent, with the standouts being Kiefer Sutherland in a very strange role as the Doctor associate of the Strangers, all stilted dialogue and out-of-breath utterances, and Richard O’Brien (of Rocky Horror Picture Show fame) as Mr. Hand practically steals the movie. His weird charisma and overwhelming menace, especially after he’s had John Murdoch’s memories imprinted onto him, stand in stark contrast to Rufus Sewell’s protagonist. It’s actually no surprise that Proyas based the look of the Strangers after O’Brien’s character in Rocky Horror, as they all bring this weird androgynous alienness to the film. I honestly can’t say enough good things about his performance. It’s just fantastic in a film filled with many good performances.

One weird note: the very end has a shot that’s almost identical to one in Requiem For A Dream, also featuring Jennifer Connelly. I wonder if Aronofsky had seen this film when conceiving of it, or if it is just an astonishing coincidence…

This film, I feel, has been unfairly forgotten and overlooked in the years since. Roger Ebert is actually one of its champions, and my esteem for it has only grown in the years since I first saw it. It had the misfortune to come out right before the Matrix rewrote a lot of the rules for the action/mindbender genre, so it might be that it is (unfairly) seen as a relic. But far from it. This film is definitely one you should make your way to, and just revel in the style and beauty of. Go ahead. Find your way to Shell Beach.