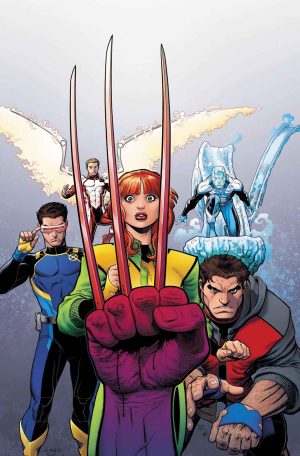 X-Men Blue takes a break from the quite interesting “Mutant Sentinel”/”What the hell is Magneto up to?” storyline to tug on a plot thread introduced back in issue one of a clawed mutant hunting down the Wendigo in the Colorado wilderness. Writer Cullen Bunn, artists Julian Lopez, Jose Marzan, and Walden Wong; and colorist Irman Niivila dedicate X-Men Blue #4 to anyone who has nostalgia for Jeph Loeb and Art Adams’ Ultimate X or Nick Spencer and Brian Wood’s Ultimate Comics X-Men by reintroducing Jimmy Hudson aka Ultimate Wolverine to the Marvel Universe.

Sadly, he has all the personality of a wet blanket compared to the vibrant banter between the original five X-Men. And this witty repartee from Bunn combined with competently staged action from Lopez, Marzan, and Wong makes X-Men Blue #4 an above average read until our protagonists turn into a superhero version of the “X-Plain the Ultimate Universe” podcast. (It’s not real, but I wouldn’t mind hosting a show like that.) The ResurrXion X-Men books have definitely been nostalgia driven, but it’s a little too soon to have those kind of feelings for Ultimate Comics X-Men and especially the first volume of All-New X-Men, which had a crossover with the Ultimate Universe because Brian Michael Bendis couldn’t resist returning to the site of his first success. And unlike the delicious cloak and dagger nature of X-Men Blue‘s first story arc, X-Men Blue #4 feels like a pretty standard heroes fight and then team up storyline. Although, the former Ultimate X-Men taking on the more, well, evil name of the New Marauders does have me wondering about their alignment in a decent final page cliffhanger. They don’t stop Jimmy Hudson from being super boring although Lopez, Marzan, and Wong deserve kudos for giving him Wolverine’s original hairdo and drawing him rougher and more savage than he looked in Ultimate Comics X-Men. 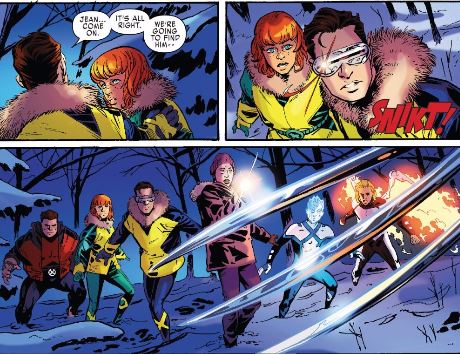 Compared to Jorge Molina’s Jim Lee revival art in X-Men Blue #1-3, Julian Lopez’s pencils are more pedestrian. With the help of bright blues and yellows from Irman Niivila, the team’s costumes (and Angel’s flame wings) are memorable and heroic. Niivila even adds bursts of red when Jean Grey uses her telekinetic powers to dominate Jimmy Hudson in combat. However, with the exception of a sequence where Iceman morphs into a Hulk-like form, Lopez’s art isn’t super memorable and comes across as more of a fill-in guy than someone who wants to put any kind of mark on this book.

Jose Marzan (Y: The Last Man) and Walden Wong (Guardians of the Galaxy) are veteran inkers ,but they don’t improve Lopez’s vacant facial expressions or the generic snowiness of his backgrounds. It seems like they were on the book just to help finish Lopez’s pencils and make sure X-Men Blue met its double shipping schedule. They do make Jean look intense any time she uses her abilities with plenty of brow furrowing. It’s fitting that she is the only character who gets fleshed out by Bunn in this issue as she struggles with the morality of using her nascent telepathic abilities on humans. Jean can alter anyone’s thoughts without them knowing it and even does that when the X-Men, the likable small Colorado town sheriff and Wendigo hunter Kira Lee, and Jimmy have a chat at a cozy cabin/bar that is familiar to anyone who has visited the tourist-y parts of the American Mountain West.

A slightly intriguing final page teaser (But did anybody really want that much of a callback to a Brian Wood comic.) and the fun chemistry and interplay between the original five X-Men thanks to Cullen Bunn’s rapid fire writing make X-Men Blue #4 bearable. (I’m calling Jimmy Hudson “Young Man Logan” from now on”.) Sadly, the plotline does feel like filler compared to the lofty heights of the opening arc thanks to its reliance on the bad cover version of Wolverine and will definitely be a snooze to anyone who missed Ultimate X, Wood’s run on Ultimate Comics X-Men, or the Ultimate Universe crossover arc of All-New X-Men.

Rating: 5 (out of 7)-Fun banter and superheroic derring-do save X-Men Blue #4 from being total nostalgic for the Ultimate Universe filler guest starring yet another alternate universe Wolverine.